Half cents of 1809 sported a new look, with a matronly bust of Liberty facing left and a modified wreath on the reverse. The new design, by John Reich, lasted until 1836, although half cents were not minted from 1812-1824, in 1827 and 1830. The key dates of this type are 1831 and 1836. The 1831 has a stated mintage of 2,200 pieces, but experts disagree over whether any were made for circulation or if all known examples started out as Proofs. 1809 half cents include interesting varieties such as "9 over inverted 9" (previously called 1809/6)and "Circle inside 0". The year 1811 features Wide and Close dates, plus an unofficial restrike that combines an obverse of 1811 with a reverse from the Draped Bust type. In 1828, mint engravers forgot to add the correct number of stars to one obverse die, resulting in the "12 Stars" variety. Half cents from 1832-1835 are relatively common, especially the 1835 (helped by the discovery of a small hoard of Uncirculated examples). The first proof half cents were made in 1831 and restrikes were made later of both the 1831 and 1836 dates. The 1837 "half cent" is a token issued privately as part of the Hard Time Token series. 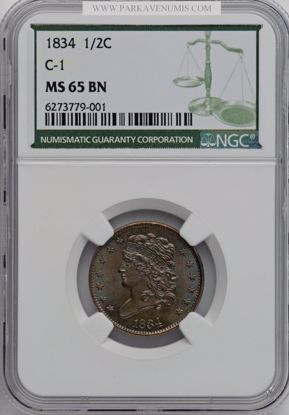