Coin of the Day

Coin of the Day

Judd 1657, Rarity 6. Bright and uniformly brilliant, with a touch of frosting on the central devices of both sides. Faint roller marks are visible on the central high points, but the strike was so strong that there is no weakness on the hair details and the striations created by the roller were almost completely obliterated.

In 1879, John A. Kasson, the United States' minister to Austria, proposed a Four Dollar gold coin, or Stella, whose metallic content would be stated in the metric system--the standard used in Europe. According to Kasson's proposal, this new coin would approximate, among other denominations, the Spanish 20 Peseta, Dutch 8 Florin, Austrian 8 Florin, Italian 20 Lire, and France's 20 Franc piece. Kasson's proposal was based on the desire to make international travel easier for Americans--a not unheard of idea that resulted in several earlier U.S. patterns. Congress became interested enough in Kasson's suggestion that it ordered the Mint to produce pattern Stellas in anticipation of regular issue coinage. Chief Engraver Charles E. Barber prepared an obverse design that depicted a portrait of Liberty facing left with long, flowing hair. The date appeared at the bottom and the inscription 6 G .3 S .7 C 7 G R A M S around the central portrait. With stars in between each character, this inscription advertised the coins' weight as 7 grams and gave the proportionate composition of gold, silver, and copper. The reverse depicted ONE STELLA 400 CENTS superimposed atop a five pointed star with the inscriptions UNITED STATES OF AMERICA, E PLURIBUS UNUM, DEO EST GLORIA (God is glorious), and FOUR DOL. in the surrounding field. Using these dies, the Philadelphia Mint struck approximately 15 examples in the specified alloy in December 1879. Early the following year, a further 400 or so pieces followed, also dated 1879.

An unknown, although undoubtedly limited number of 1880-dated Flowing Hair Stellas were also produced, of which perhaps 18-25 examples (per Breen, 1988) are extant. Much rarer than their 1879-dated counterparts, the 1880 Flowing Hair is always seen with rollermarks (as struck, and due to improper die spacing) over the central highpoints. The present example displays these features on the obverse and, to a lesser extent, on the reverse. 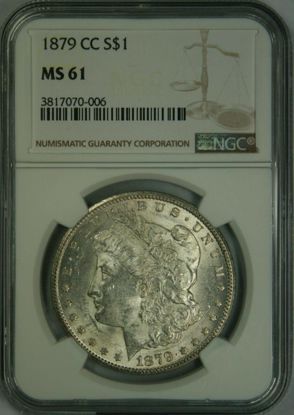 Coin of the Day 1879-CC Morgan Dollar MS61 NGC Great CC Rarity This 1879-CC Morgan Silver Dollar Clear CC MS61 NGC is a sharply defined and virtually untoned example of this perennially popular issue. Virtually white with satiny and vibrant surfaces, this is a desirable Mint State survivor of the rarest Carson City Mint Morgan dollar of the 1878 to 1885 era. ﻿ Offered at $6,150
$6,150.00