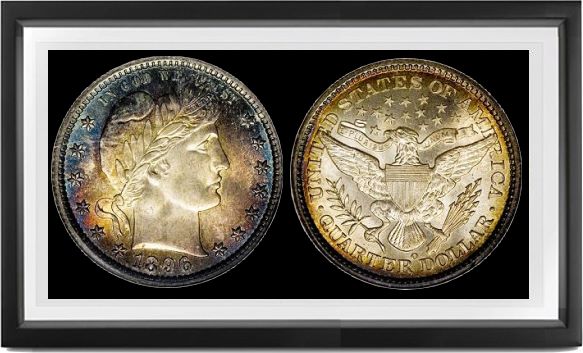 THE MINT ACT OF SEPT. 26, 1890—Mint Director J.P. Kimball's brainchild—specified that thereafter coin designs could be changed after they had been in use for 25 years. In 1891, quarters, dimes and half dollars were eligible. (The act also made dollars eligible, though they were not to be redesigned for another 30 years.)

Implementing Kimball's ideas, the Treasury Department sponsored a competition for new designs. Judges were to be Augustus St.-Gaudens, Henry Mitchell (the noted Boston seal-cutter and gem-engraver) and the Mint's own'fair-haired boy', Engraver Charles E. Barber, Most of America's best artists ignored the contest, realizing that the deadline was too short to allow time for perfecting the relief models, and the prize too small to be worth bothering with. Some 300 entries came in, of which only two rated honorable mention, none a prize. The new Mint Director, Edward O. Leech, condemned the competition as a wretched failure, and assigned Barber the task of creating new designs.

Barber's new obverse was a mirror image of the Morgan dollar head, though he cropped off most of Ms. Liberty's hair and concealed the rest under an enlarged version of her cap, replacing the assorted vegetable matter in the brim by a plain laurel wreath, and moving the religious motto above the cap; the whole conception is Germanically stolid.

The reverse is a copy of the Great Seal of the United States (1872). In the quaint but precise heraldic terminology: an eagle displayed barbed and langued, in a glory of 13 stars; on his breast the arms of the United States, argent, six pales gules, a chief azure; in his beak a scroll inscribed E PLURIBUS UNUM; in his dexter claw an olive branch of 13 leaves, in his sinister claw a sheaf of 13 arrows. The stars were not proper heraldic stars (estoiles) but molets or spur rowels, a blunder apparently derived from the appearance of these charges in George Washington's arms. There was no attempt to show the colors of leaves, feathers, claws or tongue, though traditional heraldic shading was used on the shield.

Coins of 1892 from all mints, including Proofs, come in two types. Type 1(1892 only) has eagle's wing covering less than half of E of UNITED. Type II (later 1892-1916) has wing covering more than half of E of UNITED, the other wing heavily overlapping R. Type I coins are scarcer in all mints. In 1901 a very minor change was made in the obverse hub, the leaves and berries being enlarged; this modified hub continued through 1916.

Major varieties are absent in this issue. In 1908 and a few other years we find double punched dates; a rare variety of 1898 S has the mintmark cut over something else; in 1916 D a very rare reverse die has D very plainly doubled, two curves and two distinct uprights clear.

There are no major rarities. Rarity levels follow mintage figures fairly closely, except that there are apparently fewer 1901 S's in the upper grades than 1913 S's. The final New Orleans issue, 1909 O, is unexpectedly scarce in Mint State, apparently few collectors bothering to save them at the time. Proofs are available for an ever increasing price of all dates, 1914 and 1915 being the scarcest, their scarcity accentuated by hoarding.

Click here to view our current inventory of Barber Quarters