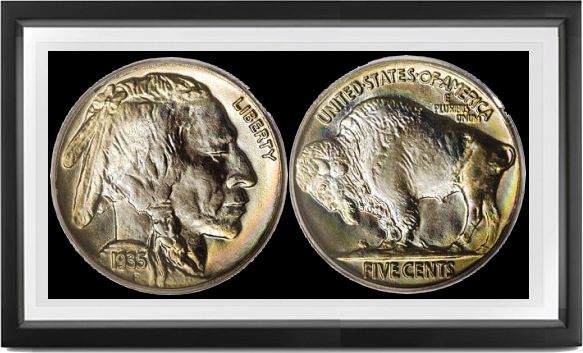 WHEN IT BECAME EVIDENT, as early as April 1913 " less than four months after Buffalo nickels were first coined—that the mound bearing FIVE CENTS would have to be modified so that the words would not wear away at once, the necessary procedure was obvious enough: place the words within a recess. That should have been enough.

Unfortunately professional jealousy reared its head, and Mint Engraver Charles E. Barber could not bear to leave well enough alone after executing the minor change required. Henceforth, not only does the bison stand on a straight line whose base defines the recess in which FIVE CENTS rests, but Barber also took the liberty of modifying the portrait and bison. Gone henceforth is much of the rugosity of Black Diamond's hide and fur, gone too many details of the Indian's hair, some wrinkles on his face, feather details, etc.; fields are smoothed out. These minor changes greatly diluted the strength of the original Fraser design. Nor did they improve the striking quality, as many coins of the 1913-15 issue are weak in centers, which was not generally true of the 1913 Raised Ground from any mint.

For which reasons, Barber again modified the design in 1916. Coins from this year through 1938 really should be called a third type: LIBERTY is henceforth much sharper. The nose longer and there is further minor modifications in the devices. Not that this helped, because the striking quality tended to worsen; some mintmarked nickels in the 1920's are virtually unknown well struck up.

Proofs of 1913-16 of this type show more detail than any regular Uncirculated specimens, but they are not in a class with the 1913 Raised Ground; surface is similar to the latter, and to the Lincoln cents of the period, being uniformly minutely granular with a satiny effect, with borders slightly broader than normal having marked inner rims. A number of deceptive coins exist, difficult to tell if made as Proofs or as regular business strikes. Proofs of 1936-37 are again different, the first style 1936's being of satin finish and unusual sharpness, the second style 1936 coins being uniformly mirrorlike, as are 1937's.

Later variations are not from intentional die changes. Obvious double dates ("double shifts," "doubled dies") are known for 1916 and 1916 D, both extremely rare so. Minor shifts—generally plainest at profile of Indian—are known for many other dates. The most famous variety of all is the 1918/7 D); this was an accidental emergency product, a die being returned to the wrong hubbing press after annealing between blows, at a juncture (fall 1917) when dies were being simultaneously made for both years. Unconfirmed rumors have been around for years of the existence of 1918/7 coins from Philadelphia and San Francisco.

The famous 1937D Three Legs variety " like its much rarer but less famous 1935 and 1936 counterparts with two legs—resulted from excessive lapping of a die to remove clash marks. The pressman on duty when the 1937 D coin was being struck, a Mr. Young, was a newcomer, and instead of stopping the press, removing and condemning both dies (the normal procedure), he felt that he was under such time pressure to complete a quota, that he took an emery stick and ground off the clash marks. In the process he removed the bison's foreleg and weakened many other details; these coins escaped into sealed sacks in some quantity before the inspectors found out and condemned the dies. From the sealed sacks they reached circulation, and strictly Mint State coins—full frost even on the weak areas—are very seldom seen, though slightly worn ones are available for a price.

On the other hand, the 1938 D over S results from economy once the authorities decided to ship no further Buffalo dies in that final year.

A complete set with all coins perfectly struck probably does not exist!