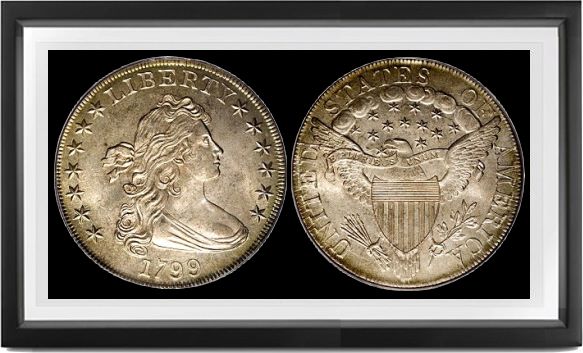 WHEN IT BECAME APPARENT THAT THE small eagle on clouds design of 1796-97 would not be satisfactory (too many specimens being weakly struck on the eagle), Mint Director Boudinot prevailed on Robert Scot to redesign the reverse. Scot's solution was predictably to introduce the same heraldic eagle already in use on gold coins, the device copied from the Great Seal of the United States. Either as a blunder or as a gratuitous piece of saber-rattling, the device shows arrows (for war-making) in the eagle's dexter claw, the position of honor, and the olive branch for peace in his sinister claw.

As usual, the device was imparted to working dies from a hub, this one containing eagle, branch, arrows and clouds but for some reason omitting the stars, which had to be added by hand. Other features always required some hand strengthening, which is why the number of arrowheads varies from 10 to the full 13, and why berries come large or small, usually five in number but sometimes only four and in one famous 1799 did none at all. (This last is not an erroneous omission but rather the result of repeated regrinding to remove successive sets of clash marks.) Omission of stars from the hub accounts for different arrangements of the stars on different dies, and for the famous 1799 reverse with 15 stars. On this latter, the upper stars were in a row of seven (rather than the normal six); when the error was discovered, the two end clouds were enlarged by hand to conceal as much as possible of the two end stars, then a second row of six stars was entered (instead of the normal five), and one before beak, and one behind head, making 13 full-size stars plus the two playing hide-and-seek. This die is found with two equally distinctive obverses, one an overdate 1799/8, the other the "Irregular Date," in which the 179 are normally curved, the last 9 far too low and leaning crazily to right away from the other digits. Both the overdate and the "Irregular Date" testify to Mint economy in those troublous times: both are 1798 dies, the former completed, the latter " to avoid overdating " with final digit omitted, both practices common to all denominations in the period. All these are type coins, the "Irregular Date" much rarer than the 1799/8 whether with 13 or 15 stars. On the other hand, other dollars commonly collected as type coins have no such interesting origin: the 1800 "dotted date" was struck from a die that had been allowed to rust, and the 1800 "AMERICAl" (a real misnomer) merely has a scratch in the die following final A.

On the other hand, the scarce and coveted 1799 with stars arranged 8 left, 5 right, may have been the last die made in the year, influenced by the similar star arrangement on gold coins, but it was not the last one put into use, as the sequence of successive die matings indicates that at least three others followed it, including the ones with the "No Berries" reverse.

Part of the mintage of 1799 may have borne date 1798; part of that reported in 1800 surely bore date 1799; and a considerable part of that reported delivered in 1801 bore date 1800. Much the same pattern continued until the presidential order suspending dollar and eagle coinage in 1804. Only relatively small amounts of silver dollars were issued in 1801-2-3, mostly to find their way to the West Indies where they were melted down and sold as bullion, being by now worth well above face value. The 19,570 dollars coined in 1804 are known to have comprised mostly 1802 Bolender 6 (normal date spaced 18 02, commonly called Close Normal Date) and 1803 Large 3. Under normal conditions the story would have ended here.

However, in November 1834 the State Department ordered Proof sets to include all denominations, for special encasement and diplomatic presentation to the King of Slant (Ph'ra Nang Klao), the lmaum of Muscat (Sayid bin Sultan), and the Emperors of Japan and Cochin-China (now Viet Nam). Because of confusion over the legal force of the Presidential order suspending dollar and eagle coinage, the Proof sets included silver dollars and eagles (plain 4 in date, style of 1834) backdated 1804. At least four other 1804 dollars were made aside from those for the sets, ultimately either for similar diplomatic purposes or for trade with coin collectors. Unfortunately, the diplomatic origin of these coins was lost in the Archives until recent years, so that much mythology developed about the "original" 1804's, resulting in extreme publicity for the coins and extremely high price levels—with enough altered dates and other counterfeits to provide a year's targets for the whole U.S. Army.