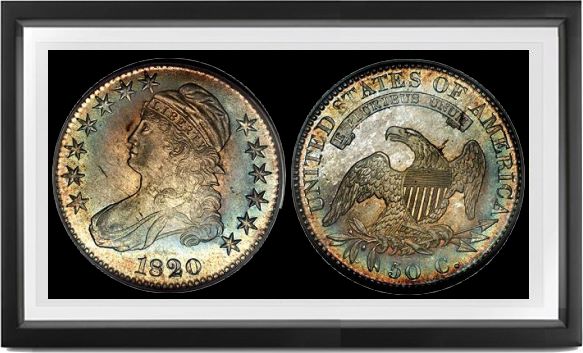 ACCORDING TO MINT DIRECTOR, JAMES ROSS SNOWDEN, (using mint documents no longer located), the change of design to the new John Reich devices took place in September 1807, some 750,500 being struck from four obverse and three reverse dies. The new design, showing a buxom Ms. Liberty wearing a mob-cap inscribed with her name, was at once attacked for portraying "the artist's fat mistress," though the design remained with numerous minor modifications until 1836.

The 1807-08 coins have the largest heads and eagles. In 1809 a revised version appears, giving Ms. Liberty a shorter neck, larger ear, and shorter curls with small triple ringlet below "R." The 1811/10 (11 over 10) has been touted as a rarity; this obverse die was either worn down quickly or reground, effacing the zero, and specimens with a clear zero are rare.

Coins of 1812-15 were again modified, the hubs here showing coarse high relief curls. Despite the Guidebook listing, the 1812/11 with large 8 is many times rarer than that with small 8, first being reported in December 1969; to date fewer than a dozen are known in all grades as against several hundred of the other. The same head reappears on the 1817/13 and 1817/14. The latter was discovered in 1930 and despite vigorous search only four specimens are known as of the present writing. From 1814 through 1830 the edge lettering shows a star after DOLLAR but no lines between words. The scarce issued dated 1815 was delivered on Jan. 10, 1816, the day the Mint reopened; on the next day a fire destroyed the rolling mills so that no silver or gold strip could be made for cutting out blanks until near the end of 1817.

In 1817 another modified head was introduced, showing finer curls in lower relief, only a few fine curls below "LI"; in 1818-24 a fifth head, this one similar but with many fine curls below "LI" and other minor differences in the hair. In this period many overdates occur and there are additional varieties from changes in style of one or more digits or letters, five different styles of date being found in 1820 alone. At the end of 1827 a curve based 2 was introduced; this is rare in full Mint State. Of the five types found in 1828, the squarebased 2 with large 8's and the small letter coins are grossly undervalued compared to the rest; in 1830, by far, the rarity is the small "O" coin with large reverse letters (no. 114 in the Overton book on halves); this is so rate that for generations its existence was controversial, and fewer than four are traced even now.