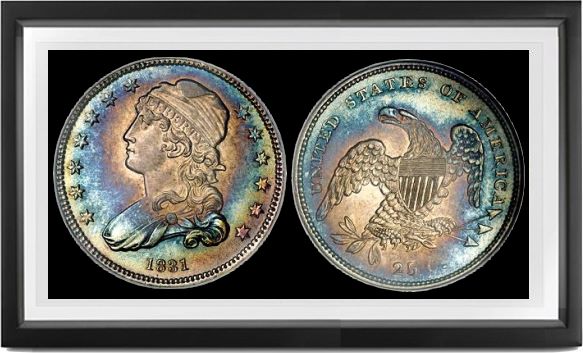 MINT DIRECTOR SAMUEL MOORE triumphantly laid the cornerstone of the new or Second Mint building, at the corner of Juniper and Chestnut Streets, on July 4, 1829, though the building was not to be completed until well into 1833, machinery only being moved in during January 1833. On the same day Moore notified the Secretary of Treasury that coinage of half dimes had begun, embodying several mechanical improvements which he proposed to extend to all other denominations as soon as possible, notably wide raised protective rims around a beaded border, and a "close collar" which confined the blanks at the moment of striking, simultaneously reeding the edges and imparting what Moore called "a mathematical equality" to their diameters. This improvement was quickly extended to dimes, gold quarter eagles and half eagles, but it was not to come to other denominations for some years, and on quarter dollars the next opportunity was in 1831, no bank orders for this denomination having been received in the interim.

With the new issue, Director Moore ordered Mint Engraver William Kneass to sharpen up the designs, omitting the old motto E PLURIBUS UNUM ("One made up of many") as redundant, expressing nothing more than the phrase UNITED STATES. Kneass's first reverse die of the new type of 1831 shows two berries in branch, evidently added by hand, and omitted on all later dies; this is barely scarce, not rare. The last dies of this date show large date (tall l's punched over short l's) and larger letters as in 1832 and later years; it is almost certain that the mintage reported for 1832 includes many of these 1831 large letter coins. Of the two varieties with large date and large letters, that showing very small short arrowheads is extremely rare, the other (with long arrowheads) is available for a price.

The date 1832 exists in two varieties, differing mostly in length of arrowheads. In Mint State the date is much harder to find than 1831. In 1833 there are two marked varieties, the less rare with period after 25 C., the much scarcer one lacking the period. One variety of 1834, not too rare though forming less than one quarter the total population of this date, also lacks the period, and the identical remark also holds for 1835, which date is the commonest of the design. The large mintage of 1835 appears to have satisfied circulation needs for awhile, as the 1836-38 issues are all considerably smaller; that for 1838 of this design only 366,000, of which some part probably comprised coins dated 1837. Coinage was interrupted in midyear to allow for preparation of dies for the new Liberty Seated type, leaving the Capped Bust type only on the half dollars.