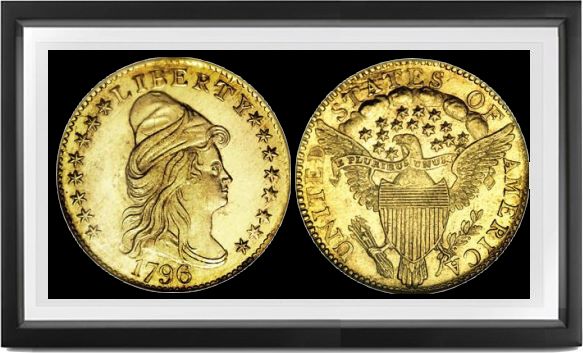 THE DESIGNS INDICATE THAT THIS denomination was considered at the outset as something hastily rushed into production to complete the presentation sets made up on the occasion of Tennessee's joining the Union, June 2, 1796, Both reverses of 1796 show sixteen stars, which would not have been logical until Tennessee's admission as the 16th state; the single Obverse with stars has 1.6, divided 8 left, 8 right. In 1797, though the reverse continued to bear 16 stars, the single obverse die reverted to 13 stars, divided 7 left, 6 right, which was changed to 6 + 7 in 1798, then—copying the Half Eagles—to 8 + 5 on the coins dated 1802, 1804 and 1806/4, but for unknown reasons back to 7 + 6 on 1805, 1806/5, and 1807 coins. Apparently the problem of arranging stars on these small dies never found a stable solution. For convenience, the coins of this general design are all lumped together, though in any lower denomination they would be carried not as one "type" but as at least five.

The capped bust right is, of course, copied from that on the Eagle and Half Eagle of 1795, the hubs being raised by Robert Scot from an unidentified prototype supposed to represent Ms. Liberty in a fashionable headdress of the day—a soft cap, not the pileus or Liberty cap. For the source of the heraldic eagle motif, one need look no farther than the back of any $1. bill, as it is an inaccurate copy of the Great Seal of the United States, embodying the same blunder found on the silver coins 1798-1807, with the arrows (representing warmaking) in the eagle's dexter (right) claw, the olive branch of peace in his less honorable, sinister (left) claw.

All dates of this type are rare because coinage of each occurred only in driblets. Of the 963 coined of 1796 without stars, not over 20 are believed to survive from both reverses, the less rare of which shows a lump at wingtip almost touching F, indentations between clouds left of upright of first T of STATES and well to right of center of 0 in OF. (The other and much rarer reverse has first S of STATES and F very close to wing; indentations between clouds directly below upright of first T of STATES and below left curve of 0 in OF. This die cracked at once from rim through E of STATES down through back of eagle's head, shield, to left edge of tail, and was discarded, accounting for its rarity—possibly 3 or 4 known.) Of the 432 coined of 1796 with stars, all delivered January 14, 1797, between 12 and 15 are thought to survive, possibly a couple less of 1797 (427 minted), and proportionately for the later years—perhaps a little over four hundred pieces irk all bearing these designs, possibly one quarter of the total dated 1807.

The infinitesimal mintages testified in their own day to the coins' status as a sort of poor relation of the Half Eagle, the latter of which occupied most of the mint's gold coinage efforts for many decades. Today they have transformed these seemingly ephemeral coins into some of the most avidly sought-after products of the First Mint. The majority of survivors are in surprisingly fine preservation, suggesting that they were put away as odd little souvenirs during the first few years of issue.