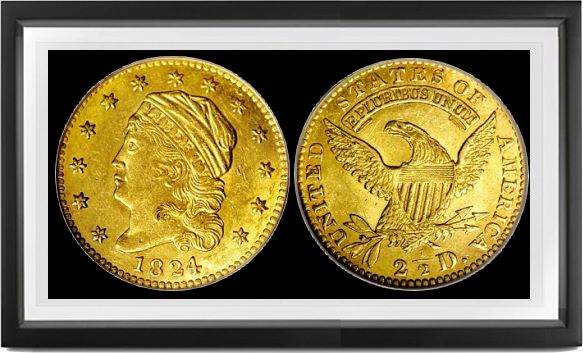 AFTER THIRTEEN YEARS OF NONCOINAGE of this denomination, suddenly a few banks specified that parts of their deposits of gold bullion and foreign gold be coined into quarter eagles—possibly as Christmas souvenirs. Accordingly, Robert Scot, by now superannuated and with failing eyesight, but secure in his 28 years' tenure as Chief Engraver, devised crude copies of the 1813-29 Capped Head Half Eagle devices, which were quickly translated into one working hub each for obverse and reverse, thence into working dies. The coins were smaller (19 mm, as against almost 21 mm for the 1808) but minutely thicker to preserve their weight unchanged.

Only a single obverse die was used in each year, though second die was made for 1821 which remained unused until 1824 when the final 1 was altered to a 4, and a second 1825 die was altered to 1826 so effectively that only a microscopic corner of the 5 shows under the 6 and not always even that much. Only in 1825 do we find more than one reverse die in use, the less rare variety (3,324 coined, February 16-june 30) having the 1821-24 reverse, the rarer variety (1,110 coined, October-December 1825) having the 1826-27 reverse, identifiable by large 2 close to leaf, fraction bar opposite a point a little above its center, stem end directly above curve of D rather than its upright.

Mintages were of the same order of size as those of earlier years. Generally from 30 to 50 specimens of each year survive, though the second variety of 1825 is extremely rare (about seven being traced to date) and the 1826 is nearly its equal (possibly a dozen on record). The same remark holds for the modified design coins 1829-33. Survivors are mostly in Very Fine to Extremely Fine condition; realty mint state pieces are very seldom met with, about three to six of each date qualifying by the strictest grading standards. The Smithsonian Institution has one proof of each date 1821-24, 1825 second variety, and possibly five others are known of 1821 (presumably made on the occasion of resuming coinage), three others of 1824, one (Eliasberg collection) of 1825 no. 2. Only one proof is reported for 1826 (ex W.W. Neil collection), and only one for 1827 (ex Cleneay, Woodin collections).

Scot died in 1824, and was replaced by William Kneass, a Philadelphia engraver of bank note plates. Kneass's specific assignment was to sharpen up the designs of all series, though not as yet to create new designs. Only as late as 1829 did he get around to the quarter eagles, his modified design notable for smaller stars and letters, slightly redrawn head and eagle, but most notably of all, beaded borders surrounded by a high raised rim, produced by a "close collar" which compressed the planchets at the moment of striking, to impart "a mathematical equality to their diameters." As mentioned, the coins have about the same mintages (4,000-odd per year), and are minutely rarer, survivors coming in the same grade range though a few more uncirculated pieces are known.

But the final year with motto, 1834, is another story. The 4,000 were coined before May 30, but most were remelted unissued as of August, 1834, when the new reduced weight standard for gold coins took effect. Four or possibly five proofs are traced, one in the Smithsonian, another in the Eliasberg collection, the others more or less waived. Of the nonproofs possibly six are traceable, the most recently offered (from the Ten Eyck, Roach, Eliasberg, New Netherlands 49th Sale, Grant Pierce and R.L. Miles collections) being finest. This date is in a class with the 1798 Wide Date, 1825 number 2, 1841, 1863, and 1875, in actual rarity and fame; it is certain that the next one to come up at auction will produce nation-wide attention and newspaper headlines.