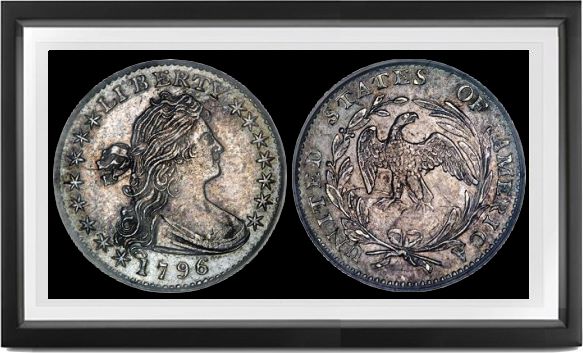 MORE NONSENSE HAS BEEN WRITTEN about the half dimes of this design than about all the rest put together. There are two and only two obverses dated 1796, yet we find that both of these have been called overdates, and the commoner of them (not an overdate) has been touted as a purported blundered die, "LIKERTY." making three alleged types in all. The truth is as follows (V-numbers indicate Valentine varieties, from D. W. Valentine, The U.S. Half Dimes, American Numismatic Society, 1931):

Of both varieties together, 10,230 coined, some part of this figure possibly comprising coins dated 1795. Rarer than 1 794 in all grades.

This order is logical: the 15-star dies were left over from 1795. The 16-star die was made, like its counterparts in all other silver and gold denominations, in connection with the admission of Tennessee to the Union (June 1796). And the permanent shift to 13 stars followed the realization that the Mint could not continue indefinitely adding stars as new states entered the Union.

Date punches on the 15-star die are same as on 1795 V-4; it is the least rare single variety of the date (R-3) and later shows many states of die breakage. A single prooflike presentation piece survives, sent by Mint Director Boudinot to Matthew Boulton as a sample of the best the Mint could then produce; this piece is traced via the Boulton estate and Waldo Newcomer to Harold Bareford of New York.

The 16-star die has date punches as on the 1796's except that second 7 is larger, indicating that the die was made in 1796. Two reverse dies: V-3 has outer berry under D (high R-5), sometimes with slight crack between 7th and 8th stars. V-4 (obverse dies usually badly marred by clashing with reverse) has reverse with no berry below D, but an outer berry between NI—the die of the 15-star coin resurrected and now generally shattered. It is also R-5, but then both these varieties are very hard to find in VF.

The 13-star die has both 7's large, unlike any preceding. Reverse unlike any preceding, a leaf touching right base of final S in STATES. This qualifies as R-6; unknown in Uncirculated, only two seen in EF, usually found in Fair to VG, and rarely available in any condition.

All varieties of both dates generally come weak in centers, partly from the condition of the press, partly from a fault in the relief, attributable to John Eckstein's reverse design, as translated into hubs by Robert Scot. The trouble is worst on half dimes and dimes, less so on larger silver, but central weakness is found on nearly all varieties of this period in all denominations. These were among the darkest days at the Mint, and the coins have the earmarks of emergency issues; they represent a tremendous challenge to today's collectors.