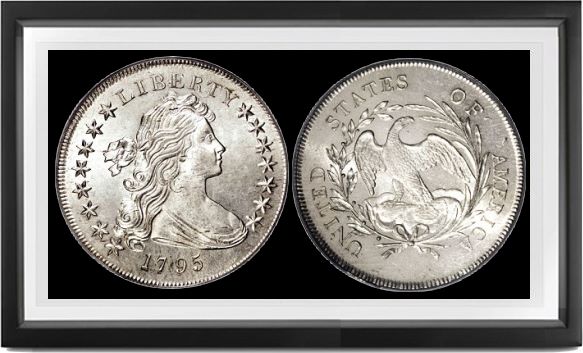 The new design represented the fulfillment of a dream for the new Mint Director, Henry William DeSaussure. On his accession, he had stated his ambitions: (1) to get gold coins into circulation, and (2) to improve the designs of all the coins, particularly the silver. To this purpose, he engaged the illustrious portraitist Gilbert Stuart, who submitted a (now lost) drawing of Mrs. William Bingham (nee Ann Willing) as Ms. Liberty; this was translated into original dies by one John Eckstein for Robert Scot, losing almost all its original excellence in the process—enough so that Gilbert Stuart's role was kept secret for over 65 years. Eckstein and/or Scot must be given the discredit for the small eagle on clouds; the use of olive and palm (?) branches in the wreath probably represents a bow to DeSaussure's Southern origins.

Two pairs of dies were hastily completed, one with the head of Ms. Liberty much too far left of center in the field, the other with slivers out of the central areas (in her hair) from initial hardening. Some 42,738 coins were struck from them in the last two weeks of October 1795, as a disheartened, disillusioned and sick DeSaussure resigned his Directorship in the face of a hostile Congress. One of the two eagle dies had cracked and was discarded; the other was retained in the Mint, being used briefly in 1796-7-8 until it wore out. A number of prooflike "specimen strikings" survive along with a larger number of regular Mint State examples, which have experienced increasing demand from type collectors.

Coinage during 1796 was larger in total quantity but under increasing difficulties. There were four obverse dies, of which three had small dates, the fourth a large date similar to that found in 1797. Of the four reverses used in this year, making six varieties in all, both large-letter dies broke (one after only a few impressions, making the extremely rare B-6 variety, identified by an outside berry below space between NI, and the heavy vertical break from O through leaves, wing and CA), the new small-letter die chipped and crumbled at IC, leaving only the worn 1795 reverse intact. Of 72,920 struck in all, a little under 3% survive, but there are very few in Mint State, almost all of these being Bolender 4's (small date, large reverse letters) " The United States Early Silver Dollars from 1794 to 1803 by M.H. Bolender. The type with small date and small letters is rare, in Mint State virtually unobtainable. One of the three varieties of this type (Bolender 3) is exceedingly rare, possibly three known; it is identified by a plain round dot above 1 in date, the same obverse as the common Bolender 4.

Previous coins showed 15 stars on obverse; but on June 1, 1796 Tennessee was admitted as the 16th state and subsequent dies bore 16 stars. This change extended to the silver dollars in 1797 only.

Coinage for 1797 was very limited. On February 28, some 342 were struck, identified as Small Letters coins; these are again from the worn 1795 reverse, now always weak so that seldom are any feathers individually discernible. Possibly as many as 18 survive in all, none Uncirculated.

The Large Letters coins with obverse stars arranged 9 left, 7 right are identified as the 4,941 struck in two deliveries May 26-June 30. Both dies cracked up, the obverse severely, the reverse remaining marginally usable arid therefore retained for 1798 reuse.

The third type, with obverse stars arranged 10 left, 6 right, is identified with the 2,493 struck in two deliveries August 12-28, just before the annual yellow fever epidemic forced closure of the mint. Its reverse die rusted but for some reason was not cleaned up for reuse. A handful of Uncs. survive for both Large Letters types.

Little is known about the two varieties of 1798 with small eagle reverse. It is uncertain if they represent the initial deliveries of the year or an emergency issue of the winter of 1798/99. One has 13 stars and the large letter reverse left over from 1797; the other has 15 stars (evidently an incomplete 1796 die with the final digit omitted) and the almost worn-out 1795 die with small letters. The latter is rarer.

The entire group of thirteen varieties is probably the most difficult single group of silver dollars to obtain in acceptable condition.