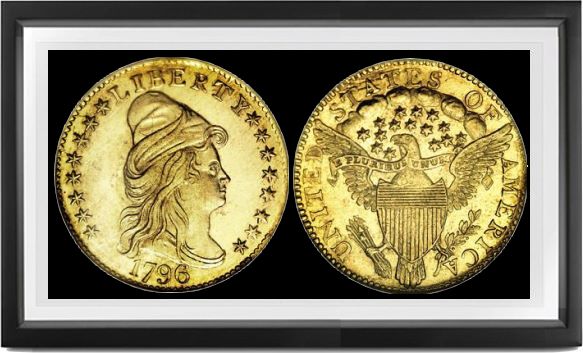 THE BEGINNINGS OF THIS TYPE are shrouded in mystery. We know that Robert Scot made the hubs and probably punched in the letters, numerals and stars, but we do not know exactly when in 1797 this type was adopted, nor how many were made in that year with this type reverse, nor the source of the portrait of Ms. Liberty. (The heraldic eagle is Scot's inaccurate copy of the 1782 Great Seal of the United States, with the blunder of having the warlike arrows in the more honorable or dexter (right) claw, the olive branch of peace in the less honorable or sinister (left) claw; it first appears on 1796 quarter eagles.)

There are only two heraldic varieties with date 1797, though we do not know for certain which came first. One of these, with 16 stars and normal date, is unique; it was discovered in the 1920's, was later owned by W.H. Woodin, Waldo Newcomer, Col. E.H.R. Green, W.G, Baldenhofer and Josiah Lilly, none of whom recognized its true importance; it is now in the Smithsonian Institution. (But why is it unique? Neither die shows any sign of breakage.) The other is a 1797/95 with 15 stars, the obv. die showing increasingly severe evidence of rust; about 8 or 9 are known to survive. Both varieties have 16 reverse stars. In 1798 there are four types, all but one with 13 rev. stars following Director Boudinot's decision that one could not go on indefinitely adding stars as new territories became states. The types are (1) large closely spaced date, (2) similar with 14 rev. stars (blundered die and rare); (3) large widely spaced date; (4) small date, both rare and common varieties surviving of this last, though it forms only a small proportion of existing 1798's. The most notable difference between large and small dates is the size of the 8, which is broad and tall in the former; the punches are the same ones used in the large cents of this year.

In 1799 we find small and large reverse stars, both types of reverse coming with normal date and with an "overdate" (second 9 large, heavy, and cut over another 9). No variety of either kind can be called even moderately common; this date is the most undervalued of the period.

Varieties for 1800 through 1803 are minor aside from one 1800 in which M is found corrected from a much larger M. Coins have been reported dated 1801 but to date all seen have turned out to be fabrications made by removing traces of 2 from regular 1802/1's.

None of the small date 1804's can be called common. The so-called large date is actually a corrected blunder, the extra large numeral punches intended for the $10 coin being first used for the 180, then partly effaced and corrected by repunching with the smaller numerals, hence "small 8 over large 8." Two reverses with this obverse, both rare. There are restrikes made outside the mint from a severely rusted die in a variety of base metals.

In 1805 there are two types: wide dates with imperfect 1 in date (left base missing), both rare, and close dates with normal 1, a little less rare; this date is also underrated in comparison with 1804 and 1806 knobbed 6.

The coins generally listed as pointed and knobbed 6's of 1806 actually constitute two major types. Those with pointed 6 all have stars arranged 8 left, 5 right; all five varieties are rare, and usually they come weak in centers. Those with knobbed 6 have stars 7 left, 6 right, and more survive in all grades of the single variety than all the pointed 6 coins and 1805's taken together; the Knobbed 6 is probably the commonest coin of the design, many surviving even close to mint state.

Most collectors have been content with one of the design, but the variations are fascinating, and in lower denominations would be major enough to warrant separate inclusion in type sets. Possibly as the gold varieties become better known the same thing will happen.

Click here to view our current inventory of Heraldic Half Eagles