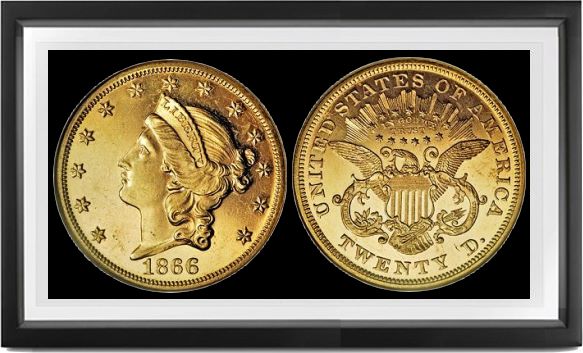 UNLIKE THE LOWER DENOMINATIONS, adding the statutory IN GOD WE TRUST to the double eagle reverse did not result in serious crowding. Longacre, to fulfill the wishes of Congress as expressed in the Act of March 3, 1865, simply slightly enlarged the oval of stars above eagle's head, and into the space bounded by the stars he inserted the motto. Two Proofs in gold (and about a half dozen in copper, a few in aluminum) were made dated 1865 for Treasury Department approval; 30 Proofs followed dated 1866 and a moderately small amount of business strikes at Philadelphia, most of which (as usual in this period) went overseas.

Most dates in this period are readily available in VF or thereabouts, bearing the S mint mark; but most of the Philadelphia dates are scarce prior to 1873, and for political reasons all the Carson City dates prior to 1874 are major rarities. A conspicuous exception in Philadelphia is 1867, of which a small board of bag-marked Uncirculated specimens lately turned up—somewhat over 40 in all.

Uncirculated examples, aside from the above mentioned 1867, are another story. Most dates from Philadelphia and San Francisco prior to 1874 are very rare in this grade, some being virtually unknown. Despite moderately small Philadelphia issues 1874-76, Uncirculated examples do turn up; scarcity here is less a matter of original issue than of the amounts recovered in the 1950's and early 60's from French and Swiss banks.

There are two date varieties for 1871: 71 touching (or practically touching) or 7 1 spaced well apart, as on the silver dollars, which used the same logotypes. The latter is considerably rarer. It is not known if distant 7 1 varieties exist in both Philadelphia and San Francisco issues; none is reported for Carson City. The reason, if any, for this change is unknown.

Not so the closed and open 3's of 1873. The closed 3 was part of the set of logotypes furnished by William Barber in the Engraving Department to A. Loudon Snowden, Chief Coiner, in January 1873. On the smaller denominations, the large knobs to 3's are so close together that these 3's were readily mistaken for 8's. A formal complaint resulted in preparation of a new set of date logotypes with much smaller knobs, spaced farther apart: "open 3." On the double eagles, the 25 Proofs and an unknown but small issue from Philadelphia show the closed 3, the vast majority the open 3; closed 3 business strikes used to be considered extremely rare, but a few more have turned up in recent years. The closed 3 date is as on the silver dollar, the open 3 as on the trade dollar. Carson City coins come only with closed 3, San Francisco coins can be readily obtained with either type of date.

Carson City issues, for political reasons, were deliberately kept limited to a small fraction of capacity, the mint authorities in Washington (after 1873), Philadelphia and San Francisco combining to insure that local bullion went instead to San Francisco. Claims—partly verified—that the Carson City Mint had issued some lightweight and/or debased coins 1871-73 led to the firing of Superintendent H.F. Rice, and to frequently seen edge test marks on surviving coins of these years, as well as providing further ammunition for the Philadelphia and San Francisco authorities' campaign for the abolition of the Carson City branch. Part of the reason appears to have been that manufacturing costs at Carson were high compared to those at San Francisco, even counting in the cost of transportation of gold and silver bullion by stagecoach through the mountain passes—to the aggrandizement of Adams & Co., Wells Fargo and others with federal contracts, but unfortunately also to the benefit of bandits and hostile Indians. The only readily obtainable Carson City dates of this type are 1874-76 inclusive; the 1870 is a fabulous rarity, the 1871-73 extremely rare. Uncirculated examples of these rare dates are all but unknown.

In its final year, 1876, two transitional patterns were made, one of which is enough like the regular issue that conceivably specimens could still turn up as the latter. The first (the one that might be found in a date set) has head repositioned, nearly midway between stars similarly to 1876-1907, but the reverse is the regular issue with TWENTY D. The lone example traced to date is Uncirculated, not Proof, and was formerly owned by King Farouk of Egypt. The other type is as adopted in 1877, with TWENTY DOLLARS spelled out; the single Proof was also in the Farouk collection, later in the Wilkinson collection.