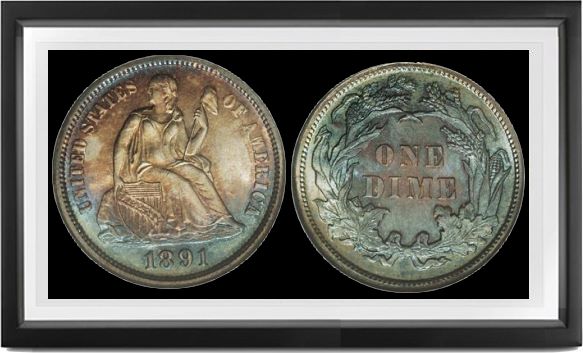 AS MAINE GOES, SO GOES—NEW HAMPSHIRE, and similarly every design change in the half dime exactly paralleled a change in the dime. That for 1860, the final one for the half dime, was one in a long series for the dime, supposedly in the interest of improving striking quality, On orders of Director J.R. Snowden, Longacre placed the usual inscription on obverse (replacing the stars), made minor modifications in the effigy of Ms. Liberty, and produced a reduction of "Newlin's Wreath of Cereals", enclosing ONE DIME but with no other lettering, for reverse. Striking quality had varied for years from mediocre to impossibly weak; the improvement was very minor.

This wreath reverse first appeared on the group of pattern half dollars of 1859, designed by James Barton Longacre after suggestions by H.P. Newlin. It consisted of corn, wheat, maple (?) and oak leaves. In several successive modifications by William Barber (1876) and Charles E. Barber (1892), the design remained on dime reverses from 1860 through 1916, Longacre's most durable creation save for the double eagle devices (1849-1907).

Coins of this new design were issued from Philadelphia in all years (aside from 1874, in which all dimes bore arrows); from New Orleans only in 1860 and 1891, the former very rare in all grades, only about four Mint State specimens being reported; from San Francisco every year except 1860, 1873-4 (arrows coins only) and 1878-83; from Carson City every year 1871-78 (aside from 1874 (arrow coins only). Philadelphia issues 1863-67, 1879-81, were issued for circulation only in very small amounts, and as a result are found mostly in Proof State, the Proofs being meant to save, the Uncirculateds to spend. S mints through 1872 are very rare in Mint State, some years being apparently all but unknown in that grade. Early Carson City coins are all very rare, the 1873 CC without arrows (12,400 minted) being represented by a unique Mint State piece in the Eliasberg collection, traced back to A.L. Snowden and apparently one of a few shipped east for assay purposes. The Carson City Mint's issues were deliberately kept limited for political reasons, a situation not changed until 1875.

Mintmarked coins of 1875 come with S or CC either within wreath (this year only) or below it as in all other years; reason unknown either for relocating the mintmark or for abandoning the experiment.

In 1876-78 coins are found from either the old ("Type I") or the new ("Type II") hub. The former (1860-77, 78 CC) has E in ONE almost touching wreath, the latter (1876-91) including some rare 1878 CC coins has E in ONE well away from wreath, with various minor modifications which improve neither the conception nor the striking qualities, but merely appear to have been done to satisfy William Barber's need to feel that he was improving coin designs.

The low mintages 1879-81 are attributable to the Philadelphia Mint's desperate straits: the Bland-Allison Act entailed drastically limiting all other coinage in favor of minting enormous quantities of silver dollars. Eventually Treasury authorization was obtained for keeping silver dollar coinage to the minimum legally possible in order that at least some lower denominations could be made, as a shortage had quickly developed. On the other hand, the reason for low mintages 1884-86 from San Francisco is not known. Large and small mint marks are reported for several of these dates, the larger as found on dollars and gold coins. The 1891 O is known in at least six varieties, the rarest of these showing the mintmark O cut over something else, either a misplaced O or an S—it is impossible to be certain which.