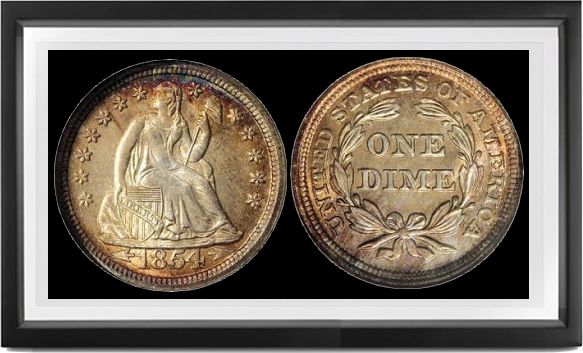 WHEN NEWS REACHED the East of immense discoveries of gold in California, nobody thought to speculate on what the new supply of gold would do to world price scales; certainly nobody expected that it would drive up the price of silver until coins began disappearing from circulation. Yet exactly this happened. The larger supply of gold—uncompensated by any additional discoveries of silver—meant that its price fell in terms of silver dollars. People accustomed to thinking in terms of gold as a constant standard of value experienced the change as a sharp rise in the price of silver reckoned in terms of gold dollars. Bullion dealers found that eventually the silver in two half dollars or four quarters or ten dimes became worth about $1.06 in gold, at which point it became profitable to start melting up silver coins in quantity, selling the ingots for gold, turning the gold in at local banks for silver coins at face value, and repeating the process. This "endless chain" quickly exhausted local supplies of silver coins up and down the Eastern seaboard. Leaving a gap between cents and gold dollars filled only by worn billon trimes (low grade silver 3 cents), worn-out and often counterfeit Spanish and Mexican fractions, and irredeemable paper scrip.

After much dithering, Mint Director George N. Eckert finally got the idea of reducing the weights of silver coin to a point at which this remelting "endless chain" would no longer be profitable. He managed to persuade Congress to go along with his scheme, and the Mint Act of February 21, 1853 accordingly reduced the weight of the dime from 41.6 grains (= 2.68 grams) to 38.4 grains (=2.48 grams), proportionately with the other silver coins through the half dollar.

the other silver coins, there was no time to prepare and submit new designs for Treasury Department approval, yet it was absolutely essential to distinguish "old tenor" (pre-1853 heavy standard) coins from "new tenor" ones (those of the new lighter weights). Mint Director Eckert decided that some kind of obvious distinguishing mark was the answer, and he ordered that arrows be affixed flanking dates on all “new tenor” silver. This practice was continued through 1855.

By March 1853 some 95,000 no arrows dimes had been minted from two obverse dies; many of these were melted later along with earlier dates, and the preservation of a small number of Mint State ones is credited to H. P. Newlin, the half dime specialist. About fifty obverse dies were meanwhile being prepared with arrows, in anticipation of a large mintage. Five Proof sets were struck, March 3, 1853, consisting only of silver coins with arrows—no copper, no silver dollar. These sets were long since broken up, the survivors being of the highest rarity. Regular coinage with arrows began over a month later, over 12-million being coined that year in Philadelphia, some 1.1-million in New Orleans. The coins went into circulation and stayed there, accounting for their being found in worn condition and their scarcity in Mint State; comparatively few people bothered to save them for souvenirs. For many years coin dealers would not stock them in any condition, failing to notice their scarcity in top grade. During the next couple of years, much of the coinage was made from silver obtained by remelting "old tenor" coins. Uncirculated specimens of 1854-55 are proportionately scarcer than of 1853, as mintages were lower in these years. More dimes were minted with arrows, 1853-55, than the total mintage 1796-1840; today they represent interesting mementos of a monetary emergency.