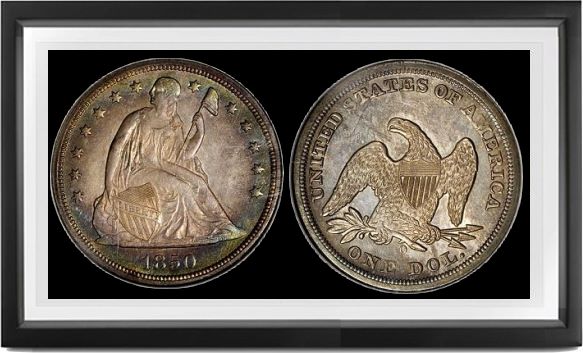 ALL THE SILVER DOLLARS OF 1840 were made from obverse dies exemplifying the "improvements" inflicted by the Anglo-American miniaturist Robert Ball Hughes upon a hapless Ms. Liberty. Compared with the original Sully-Gobrecht conception (1846-39), this is a sorry mess indeed: besides chipping away much of the rock, and enlarging the scroll bearing her name, which might have been defensible, Hughes chose to flatten out most of her female contours and add " for no discernible reason except possibly to make the triangular nature of the composition more obvious—a bulky cloak or himation over the crook of her elbow. The flying eagle was abandoned in favor of the old John Reich "sandwich-board" eagle. The new coins were not an improvement over the old in striking quality; flat heads are far more often seen than well struck heads, 1854-57 being notoriously weak.

Mintages were limited. Silver dollars had little or no circulation, except in California after 1854, where they were shipped as "small change," After the discovery of gold in California, which forced the world price of gold down in terms of silver, or correspondingly raised the price of silver in terms of gold, very little silver was brought into the mint for coinage, as it became worth more as bullion than the face value of its equivalent weight in coins. In 1851-53, many older silver dollars were melted, as worth about 6% over face. Mintages of 1851-52 for circulation were very low, and the coins were recognized as rarities as early as 1858, for which reason Proof restrikes were made. Silver dollars continued to be minted at the old weight even after weights of subsidiary coins were reduced, on the mistaken assumption that this was a fundamental obligation of the government; as a result, the coins continued to be melted as worth well over face.

Naturally, the silver dollars of 1854-57 are much rarer than their mintage figures would suggest. No dollars at all were made for circulation in 1858—only about 80 Proofs with the sets. Some later dates are also rare, especially 1862-65.

There are no major varieties among the coins made for circulation. One 1842 obverse has smaller stars, from a lapped die; one of 1844, quadruple vertical lines in obverse stripes, from a minor "shift" or doubling (double entry of hub into die in minute misalignment). Some 1850's show recut base of 0. Originals of 1851 have date high, close to base; restrikes have centered date.

Proofs were made of all years, though the 12 Proofs made dated 1853 are all restrikes made in late 1862 or early 1863. In 1845 one variety shows plain doubling at 84; in 1846, one variety (long miscalled an overdate) has date first punched far too low, then its lower half effaced, then repunched higher. Proofs of 1854 have a triangular object (part of crosslet of 4?) down from rocky base above space between 54. It is suspected that some of the Proofs of 1840-50 were also restrikes from original dies, but in any event, original or restrike, they are of great rarity. The Proofs dated 1866 without motto (two known) are pieces de caprice, one included in the set made up for R. Coulton Davis and included in the 1967 robbery of the Lamrnot duPont coins, the other recently offered at a high five-figure price.