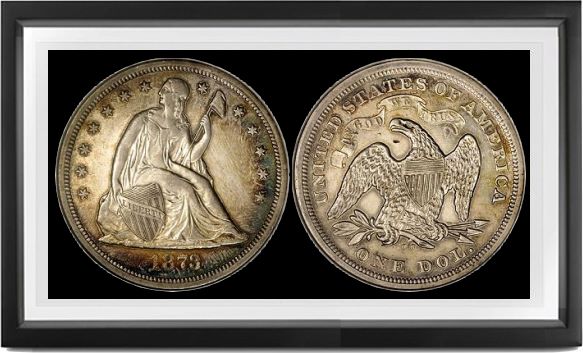 PURSUANT TO THE ACT OF MARCH 3, 1865, the dollar was included with other silver coins scheduled to bear the motto IN GOD WE TRUST. Seven Proof sets with the new motto were made up dated 1865 for Treasury approval; and in January 1866 the new issues were begun.

The majority of Philadelphia coins in collectors' hands, except for 1871 and 1872, are Proofs or impaired Proofs. The 1871 and 1872 have become relatively common in bag-marked Uncirculated condition, particularly the former, owing to bags found in Treasury vaults prior to 1963.

The tiny issues from San Francisco of this design represent a couple of major mysteries. No mint report or other documentation accounts for the tiny group of 1870 S coins, though the prooflike surfaces on the best ones of the ten survivors suggest that they were made for presentation purposes—especially considering the year 1870, during which a major celebration was held, on the occasion of the dedication of the new mint building at 5th and Mission Streets. No reason is at hand for the issue of only 9,000 specimens in 1872. And finally, though there were 700 silver dollars made (plus two reserved for assay) dated 1873 S, no specimen is known in any collection today, the mutilated example known to rumor has not yet been confirmed. It is surmised—again without proof—that these coins were melted along with other obsolete (though still technically current) issues after July 1873.

The four Carson City issues are an almost equally difficult group. Only the 1870 CC is available in upper condition grades, apparently some having been saved as first of their kind. The others are much rarer, owing to politically motivated orders from Philadelphia to keep issues very limited—which limitation in turn was used as a weapon in the campaign to abolish the Carson City Mint.

Proof dollars of 1866 come from two different obverse dies, one with centered date and base of 1 recut, the other (rarer) with date placed low and slanting up to right. Some original Proof sets of the year have been seen, in the mint wrappers, with one in which four silver coins are replaced (evidently as issued) by Uncirculated pieces. Proof dollars of 1867 come both normal (two obverses), and with an obverse with normal large date punched over small date (probably the half dollar logotype); this last is very rare. There is a normal and a recut date on 1868 Proofs. Coins of 1871 come with 71 far apart or with these two digits almost touching. Proofs of 1873 are rarer than the mintage would suggest, probably because some of them—and some of 1872—were included among the 2,258 unsold Proofs sent to the Melter and Refiner on July 10, 1873. There are no significant varieties among the nonproofs except for wide or close CC on the 1870 CC.

The Mint Act of February 12, 1873 abolished the silver dollar, an action which was to lead only to enormous political pressure from the silver lobby, a group representing British and American owners of western silver mines. Silver at that time had no commercial use other than coinage, and the immense discoveries of that period were lowering the metal's value reckoned in terms of gold, so that the silver lobby exerted every effort imaginable to force the authorities to mint more silver dollars, paying the highest possible market price for the bullion. The 1873 Act was a slap at the silver lobby, but in five years these sharp operators were to reap their extravagant reward with the new silver dollar act sponsored by "Silver Dick" Bland and John Allison, passed over a veto.