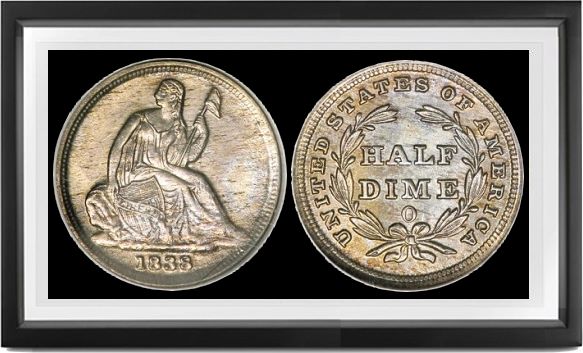 UNIFORMITY OF DESIGN appears to have been a positive fetish with successive Mint Directors beginning with Henry William DeSaussure (1795). The way this worked was that as soon as a new design was adopted for one denomination, as quickly as possible thereafter it would be copied in smaller scale for other denominations in the same metal. Thus when DeSaussure prevailed on Gilbert Stuart to portray Ms. Liberty in the persona of a wealthy Philadelphia socialite, the design first showed up on silver dollars in October of that year, followed by the halves, quarters, dimes and half dimes in 1796; the heraldic eagle, after our nation's Great Seal, first appearing on quarter eagles in 1796, spread to dimes and dollars in 1798, half dimes in 1800, half dollars in 1801. Similarly, John Reich's overstuffed Capped Bust design of 1807 made a slower progress of contagion from half dollars to dimes in 1809, quarters in 1815, and half dimes in 1829.

Accordingly, when the Sully-Gobrecht seated Liberty conception was adopted on the silver dollar at the end of December 1836, Mint Director Robert Maskell Patterson at once ordered that new matrixes, hubs, and working dies be made of the same design (without stars) for half dimes and dimes, as soon as practicable. The reverse was to consist of a simple wreath of laurel, enclosing the denomination and surrounded by our nation's identity. Of course, all this new die work had to be shoehorned into a schedule already calling for large numbers of dies for cents and half dollars in existing designs.

After the final deliveries of Capped Bust half dimes (some 871,000 pieces, from three pairs of working dies, January—June 1837), the new working dies were ready, and on July 25, 1837 some 20 Proofs were struck, commemorating the inception of the new design. One of these was placed by Adam Eckfeldt into what would the next year be officially named the Mint Cabinet Collection, now on indefinite loan at the Smithsonian Institution. Others went to the Secretary of Treasury for presentation to a variety of VIPs; at least a dozen are traceable today, some of them evidently kept as pocket pieces long enough to have acquired nicks and scratches. As usual with new designs, many of the little coins were saved by the general public as novelties, and Uncirculated specimens are available for a price.

During the remainder of the year, a total of 1,405,000 were struck from apparently four pairs of dies. The first obverse has date in a curved line with tall vertical peak to 1 (sometimes called "large date" though the difference in size from the later style is microscopic), as in 1836-37 Capped Bust coins. The other three obverse dies have date in a straight line with flat top to 1 (sometimes called "small date") as in 1838.

Two pairs of dies were made during the fall of that year, dated 1838, mintmarked O, and shipped to the New Orleans Branch Mint, for use during the calendar year to follow. After many delays, the newly established branch finally managed to issue 115,000 half dimes from these dies, which coins promptly went into circulation and stayed there, passing at par with "half bits" or medios (Mexican medio real coins, value 6 Â¼ cents apiece), alias "picayunes." For which reason the vast majority of 1838 O half dimes known today are in well worn condition, Uncirculated specimens being many times rarer than the Philadelphia coins of 1837 of the same design.

Later dies for both mints had stars added near border, again copying the silver dollar; and our coins were never again to be so free of clutter as they had been on the ephemeral 1837-8 design.