LIBERTY SEATED HALF DOLLARS WITH MOTTO AND ARROWS (1873-74) 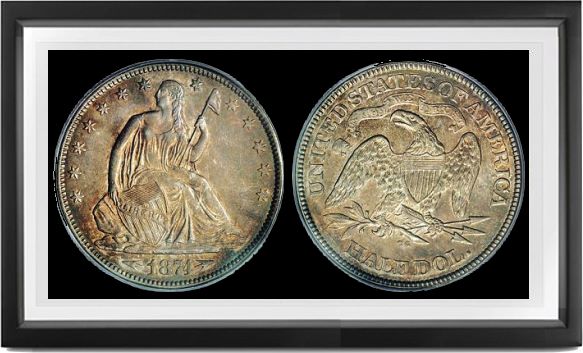 THE OMNIBUS MINT ACT of February 12, 1873, commonly known in its own day as the "Crime of '73," affected the half dollar series in that henceforth the coins were to have an exact weight in grams-12.500 grams, or 192.9 grains, compared with the former standard of 192 grains troy = 12.44 grams. This was essentially a paper complication, requiring only the most microscopic adjustment of the thickness of the strip used for making planchets; actually, the officially permitted "remedy" or tolerance of weight deviation of 3 grains either way meant that old blanks could be used, and probably were, without any danger of repercussion from the next meeting of the Assay Commission. The law had no effect on public unfamiliarity with the metric system; a century later the latter is still being debated in Congress. The existence of permitted tolerances of as high as 0.2 gram either way made the coins useless as metric weights.

For unknown reasons, the new coins were to bear a distinguishing mark, which the Director decided should consist of arrows at date.

Though the older coins were supposedly to remain current, many of them were melted after July 1873, accounting for the rarity of many S and CC mint issues.

All these coins have the open 3 logotype. S mintmarks come in two sizes, small and minute ("microscopic"), the former on both years, the latter on 1874 S coins; a small S 1874 S coin is reported with double punched S, and this date is very rare in Mint State.

Less publicized is a variation in size of arrows at date. Coins of 1873 (Philadelphia Mint) come with long (normal) or short arrowheads, the latter quite rare. One short arrowheads die also has "quadruple stripes," the vertical stripes on Ms. Liberty's shield showing four lines instead of the customary three. This is not a new hub but a doubled or "shifted" die; some other details, notably those on the edge of the shield, the hand, and parts of the drapery, show extra impressions, the die having received two blows from the hub in imperfect alignment. This variety is very rare and seldom noticed. Branch mint coins of 1873 normally have long arrowheads. Coins of 1874 have small arrowheads, much smaller than the small size of 1873; Taxay mentions a long arrows variety of the 1874 Philadelphia minted half dollar, but I have not seen it.

Carson City coins of 1873 come with two different styles of CC, small roundish C's and taller, narrow, boldface C's. It is not known which is rarer as yet.

The numbers of dies used for these mintages have not been ascertainable.

The new metric weights continued through 1964, but their effect on the public has been zero. Beginning January 1, 1875, the Director ordered that the coins no longer bear arrows at dates—an end as arbitrary as its beginning.