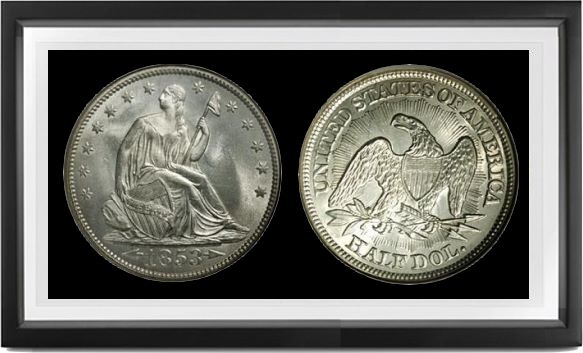 THE DISCOVERY OF GOLD IN CALIFORNIA lowered the price of bullion reckoned in terms of silver, or equivalently forced up the price of silver reckoned in gold dollars, until it became profitable for bullion dealers to melt down silver coins as worth above face. Silver coins vanished from circulation; little silver reached the Mint for coinage, and there was nothing between the cent and the gold dollar in circulation aside from irredeemable privately issued scrip.

Mint Director George N. Eckert proposed to Congress that weights of silver coins (except the silver dollar, for unknown reasons) be lowered to a point at which remelting would no longer be profitable. This proposal passed, becoming the Act of February 21, 1853. Henceforth half dollars would weigh 192 grains (12.44 grams) compared with their former 206 Â¼ (13.36 grams).

A distinguishing mark was necessary despite there being no time to prepare and obtain approval of new designs. Eckert ordered that it consist of arrows flanking the date, and rays around the eagle.

On March 3, 1853 five Proof sets were struck, consisting only of half dimes, dimes, quarters and half dollars with arrows. These sets were long since broken up, and the individual coins are of the highest rarity, one being in the Smithsonian Institution.

Production coinage began on May 21 with 80,000 pieces delivered. A total of 3,532,700 were delivered at Philadelphia within the calendar year, from 49 obverse and 55 reverse dies. There were also 1,328,000 made in New Orleans from 26 obverse and 19 reverse dies. This was less than half the normal die life of 200,000 to 250,000 impressions, and it has been theorized that the additional operations of adding arrows and rays weakened the dies, possibly contributing to the abandonment of the rays in later years.

On the expectation that the provisional branch mint at San Francisco (then operating under the name and style of the "U.S. Assay Office of Gold") might find a way of obtaining enough parting acids to make gold and silver coins of legal fineness, the Philadelphia Mint shipped two pairs of half dollar dies, but no 1853 S coinage was executed.

There are no major die varieties of this issue, though recut dates are known for both 1853 and 1853 O, and mintmarks vary somewhat in position.

For many years, coin dealers believed the issues of 1853 with arrows to be so common that there would be no point in stocking even Mint State examples. As a result, nobody bothered to notice that the arrows and rays coins are rare in Mint State. They went into circulation and stayed there, and comparatively few people saved them for souvenirs. Their recent meteoric price rise in Mint State has been attributed to the belated recognition that comparatively few perfect ones have survived.