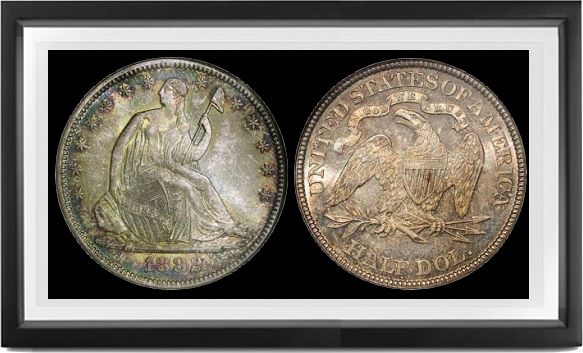 ISSUES OF HALF DOLLARS during the period of suspension of specie payments " 1863 to 1873 no arrows inclusive —remained limited; silver was hoarded especially during the war years, and what silver was coined mostly went overseas. Examples in collectors' hands are for the most part Proofs, which were made in quantities of a few hundred each year to be saved. (The apparent exceptions through 1878—when specie payments were resumed and most greenbacks redeemed—come from recoinage of obsolete and worn-out coins of various denominations.)

The Act of March 3, 1865, which is known to different kinds of collectors for authorizing nickel 3 cent pieces and for authorizing more compound interest paper notes, also authorized the use of the motto IN GOD WE TRUST on silver coins above the dime denomination, on gold coins above the quarter eagle. Seven sets of silver patterns, of the regular designs dated 1865 but with the proposed motto reverse, were issued, together with two gold sets, and a number of each struck in copper or aluminum. On receipt of approval from the Treasury Department, the Director ordered the Engraving Department to go ahead with manufacture of working dies of the new type. As of Jan. 1, 1866 in particular, all half dollars henceforth were to bear the motto. (The only exception, 60,000 coins dated 1866 from the San Francisco mint, covers those made before the new reverse dies were received at this branch.) For which reason the unique 1866 without motto, from the set of quarter, half dollar and dollar of the same type included in the 1967 robbery of the Lammot duPont collection, must be a "piece de caprice", an afterthought, and there is evidence it was made for its first owner, R. Coulton Davis, the Mint's friendly neighborhood druggist who probably kept the fellows supplied with laudanum.

Quite a number of dates are known in this period with partial drapery or no drapery from elbow; this feature results from too vigorous lapping or regrinding of obverse dies, probably to remove clash marks. "No drapery" dates include, among others, 1867, 1870 S; partial drapery is known on almost all the S mints through 1877.

Many of the coins without arrows of 1872-73 were melted in and after July 1873, after the new Mint Act had occasioned the addition of arrows near dates to identify coins made at the new weight. This accounts for the total disappearance of 1873 S no arrows (5,000 coined) and the great rarity of 1873 CC no arrows (122,500).

Early issues of 1873 show the 3 almost closed; a complaint from the Coiner that the digit, could on small denominations readily be mistaken for an 8 occasioned preparation of new date logotypes with open 3.

The final years of this design from San Francisco and Carson City are of limited mintage and generally considered very rare; the '78 CC is extremely rare in Mint State, whereas half a dozen or more Prooflike Uncirculated examples remain of the 1878 S. Interruption of these issues, and limitation of half dollar issues from Philadelphia 1879-91, reflect the mints' nearly exclusive preoccupation with silver dollars following the disastrous Bland-Allison Act, whose sole purpose was enriching owners of western silver mines, and whose major side effect was to make smaller silver coins almost impossible to locate. Most of the survivors of these dates are Proofs; the business strikes have almost entirely disappeared.