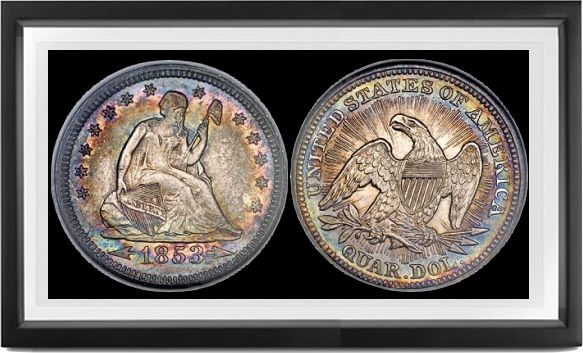 IN 1851-53 IT BECAME increasingly apparent that no matter how much silver could be located for coinage, no silver coins were going to remain in circulation, as they were worth well over face value just as bullion. Bullion dealers could make over 5%—in 1853 more like 6%—simply by bringing gold coins to banks or the mint, exchanging them for silver coins, melting down the silver coins in quantity and selling the ingots for a profit in gold, then repeating the process indefinitely. This could not be allowed to continue, as with the disappearance of silver coins there was no legal tender medium of exchange of lower value than the gold dollar. Cents could be refused, having no legal tender quality; billon (low grade silver) trimes or 3 cent pieces were in short supply as almost nobody was willing to furnish silver bullion to the Mint to make them; silver coins were nowhere to be seen, and they were being replaced by an inundation of worthless scrip, which could not be used for paying taxes and which could likewise be refused by storekeepers.

Mint Director George N. Eckert devised the plan of reducing the weight of silver coins to a figure which would eliminate any profit to bullion dealers in melting them. The new coins would have to have a distinguishing mark, and his choice was arrows flanking the date on the obverse, and rays behind the eagle on the reverse. He ordered Mint Engraver James Barton Longacre to prepare the necessary irons and make the dies of the new pattern, as soon as he learned of the passage of the Act of February 21, 1853 authorizing coinage at the new weight (96 grains, compared with 103-/8 "old tenor"). Before the effective date of the act, some 44,200 quarters without arrows (from a double date die long identified as "1853 over 52") had been coined, most of them being melted, a few being saved owing to efforts of the half dime specialist H.P. Newlin.

On March 3, 1853, five Proof sets were struck, consisting of half dimes, dimes, quarters and halves with arrows, the two larger denominations also with rays; these sets have long since been broken up, and the individual coins are of the highest rarity.

On the following April 26 coinage of quarters of the new type began, some 780,000 pieces being delivered. During the remainder of the year a total of 15,254,200 quarters were issued from the Philadelphia Mint, from 119 obverse and 120 reverse dies. This was both the largest annual coinage and the largest manufacture and use of dies for a single denomination in any one year up to that time; the total exceeded all previous Liberty Seated issues (1838-53 No Arrows) put together. There were also some 1,332,000 from the New Orleans Mint, from four pairs of dies, the largest issue of quarters till then from this branch. The coins promptly went into circulation and stayed there, no melting following. This fact accounts for the ability to acquire the 1853 quarter with arrows and rays in worn condition, and its great scarcity in Mint State; nobody bothered to save the new coins. As a result, for many decades coin dealers refused to stock them in any condition, and Mint State examples became rare.

On the off chance that the provisional U.S. branch mint at San Francisco (operating under the name of "U.S. Assay Office of Gold") might manage to solve its problems with parting gold, i.e. extracting the silver so that its gold coins would be within the legal limit of 50 parts silver per thousand, and so that it could begin issuing silver coins, the parent mint at Philadelphia sent two pairs of quarter dies, but no 1853 S coins followed.

To save the cost and time of an extra operation, the new Director, James Ross Snowden, decided that the reverse rays would be dropped from following issues.