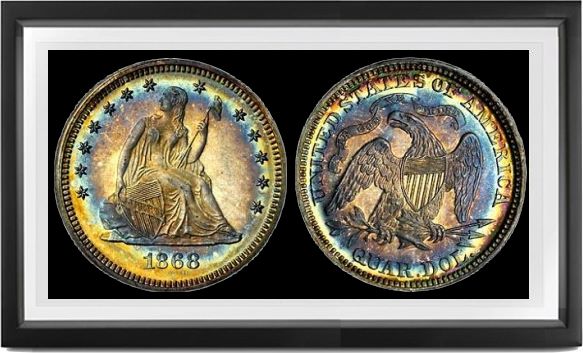 THE ACT OF MARCH 3, 1865—another of those omnibus bills of which so many had been passed during the Civil War—not only authorized another issue of compound interest notes, and fixed the weight and terms of issue of the three-cent nickel coins, but also directed that henceforth all silver and gold coins of suitable size should bear the motto IN GOD WE TRUST. Many have heard the story of how the Rev. M. R. Watkinson, of Ridleyville, Pa. wrote the Treasury Secretary, Salmon P. Chase, Nov. 13, 1861, proposing the addition of a religious motto to our coinage (his letter is now in the Chase Manhattan Bank Money Museum, Rockefeller Center, New York City), eventually leading to the adoption of this motto on the 2 cent (1864) and the silver and gold coins of 1866. Seven sets of pattern silver coins (quarter, half dollar arid silver dollar) and two sets of gold coins (half eagle, eagle, double eagle) were made in 1865 bearing the motto as adopted, together with a somewhat larger number of similar sets in copper; these were evidently for Treasury approval of the new designs with motto. The similar coins dated 1863 and 1864, in silver and base metals, appear to have been afterthoughts made in 1867 or '68.

Issues of quarter dollars 1866-73 of this type were quite limited; little bullion came in during the war and the postwar continuing suspension of specie payments. The vast majority of specimens in collectors' hands, 1866-70, are in Proof State. S mint coins are very rare in Uncirculated State through 1872; CC mints, 1870-73 no arrows inclusive, are of great rarity in all grades, issues being deliberately kept limited by official policy emanating from Philadelphia.

In 1873 the no-arrows coins from Philadelphia come with closed or open 3, the former found on all 600 Proofs and apparently 143,700 business strikes, the open 3 on possibly 76,300 business strikes, which are for some reason very rare. (The exceedingly rare 1873 CC without arrows has a closed 3 only). This change of date logotype was due to ease with which the closed 3 type could be mistaken for 1878 on the smaller denominations; later issues with arrows all had open 3.

Varieties in this period of any consequence are few, one of the major ones being the 1877 S over lazy S blunder; the S punch was first entered into the die blank rotated 90 degrees from normal, then corrected. Only the first few impressions show it clearly; later strikes—either from die wear or relapping to efface the blunder—show only traces of the horizontal S. Both S and CC mint marks come large or small and in varying styles.

Philadelphia Mint issues 1879-90 are very limited, most of the specimens in collector's hands being in Proof State; Uncirculated pieces are much rarer than Proofs, most having been spent or melted. The reasons for this coinage limitation are not completely known but " as with half dollars " appear to relate partly to the enormous output of silver dollars, required by the foolish Bland-Allison Act of 1878, which for long nearly monopolized the mint's coining facilities on behalf of an artificially subsidized market created to enrich American and British owners of western silver mines.

The series ends with a rarity, the 1891 O —the tiny issue of 68,000; this date is very rare in Mint State, in great demand from type collectors. Two brilliant Proofs are reported, apparently made on occasion of resumption of quarter dollar coinage from this mint, where it had been interrupted since 1860.