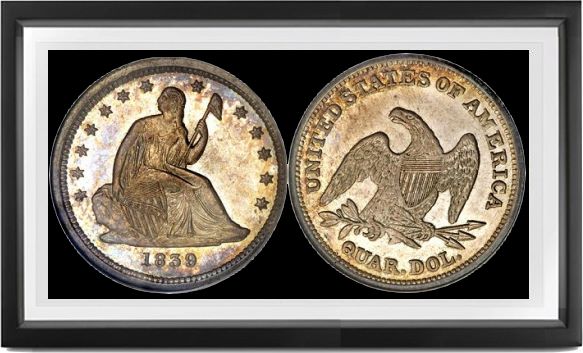 ON SEPTEMBER 13, 1838, Mint Director Robert Maskell Patterson sent twenty "specimens" on the new Liberty Seated design to the Secretary of Treasury as a new issue. It is not known if these were Proofs, but in any event only one Proof is traced now (ex "Anderson Dupont," Edgar A. West collections). Regular production coinage began on Sept. 29, only 466,000 being coined. The new design in the original Sully-Gobrecht conception was short-lived, comprising only 1838, 1839 and 1840 New Orleans Mint—a total of 1,274,346 in all, a figure exceeded by the last four dates of Capped Busts and by the mintages of 1840-42 of the modified design. No wonder, then, that these No Drapery coins have lately become recognized as scarce in all grades and very rare in Mint State.

Patterson, never one to let a good thing alone, decided to "improve" the design, and hired the miniaturist Robert Ball Hughes to work over the effigy of Ms. Liberty. Besides fattening her arms, chipping away much of her rock, and enlarging the scroll with her name, his major contribution appears to have consisted of flattening her contours and causing her to carry an impossibly bulky cloak over the crook of her elbow, which uncomfortable position doubtless accounts for her unpleasant facial expression. As an "improvement," the changes added up to a dismal failure, as from now through 1858 flat striking is the rule, not the exception—unlike 1838-39.

In this period there is one major rarity: the 1842 with small date as in 1840-41. This is reported only in Proof State, only five specimens being claimed to exist, of which two are impounded in museums, a third in a Proof set of the year formerly owned by Oscar Schilke.

The date 1849 O (mintage uncertain, believed to have been included in the first 16,000 delivered in 1850) is also rare in all grades. All dates prior to 1853 Arrows are rare in Mint State, part of this rarity doubtless due to weakness of striking (unusual for the type) which makes them look more worn than they actually are. Many of the 1848-53 No Arrows issues inclusive, from both Philadelphia and New Orleans, were melted down as worth over face value, owing to a rise in the world price of silver reckoned in terms of gold following on discoveries of gold in California.

In the later years, the rare ones are the S mint coins 1856-65, together with the Philadelphia coins of the Civil War years 1863-65. By far the rarest of these is the 1856 S with large mintmark S punched over a much smaller S; only two of these have been traced to date. Some of the later S mints are all but unknown in Mint State, and the wartime Philadelphia coins are represented in collections almost solely by Proofs, which were meant to be saved.

In 1859 the design was again modified by Longacre with the help of Anthony C. Paquet, most notably at head, where the number and conformation of the thongs binding Ms. Liberty's hair have been changed; from now on the coins generally do come better struck.

The unique 1866 without motto is a fantasy piece, struck in a set with the half dollar and silver dollar long after authorization had been received to adopt the new design with motto. This set was consecutively in the collections of R. Coulton Davis (for whom it was probably made), William H. Woodin (later Secretary of Treasury), Waldo Newcomer, F.C.C. Boyd, Wayte Raymond, Col. E.H.R. Green (son of Wall Street's famous Hetty Green), Boyd again, King Farouk of Egypt, Edwin M. Hydeman, and Lammot duPont; it was among the coins stolen from the duPont collection in 1967.