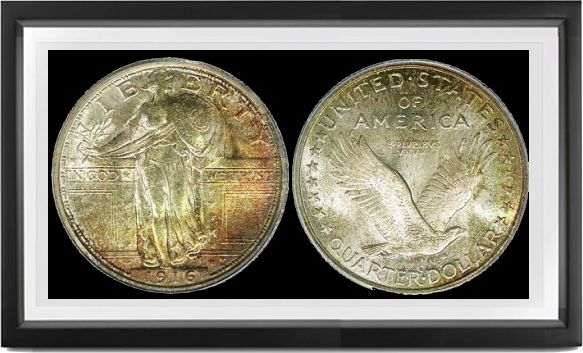 BY THE ACT OF SEPTEMBER 26, 1890, any coin design could be changed at any time after it had been in use 25 years. The Barber quarter's statutory lease was due to expire in 1917. Early in 1916, the Treasury Department, having forgotten about the dismal results of its earlier contest, arranged another public competition for new designs for the dime, quarter and half dollar. On March 3, 1916, Mint Director Robert W. Woolley advised Engraver Barber that the designs submitted by Hermon A. MacNeil had been approved for the quarter dollar, and that arrangements were to be made for MacNeil to visit the Mint and confer with Barber on the mechanical requirements which his relief models must meet. Barber was completely uncooperative; Morgan—his by then almost forgotten assistant—far more helpful. On May 23, 1916 MacNeil's galvano models, suitable for electrotyping and reduction to coin size, were approved. Jumping the gun by several months, the Philadelphia Mint coined some 52,000 quarter dollars of the new design during calendar year 1916. Several Matte Proofs are known, at least one of them in the Smithsonian Institution. The coins of this year have always been in demand though they are always available for a price.

The design was minutely modified in 1917. On the 1916 quarters, the drapery does not quite touch base; the big toe of Ms. Liberty's right foot (at the observer's left) slightly overlaps base. On the 1917 Type I's, the drapery is embedded in base; Ms. Liberty's big toe rests atop base but does not overlap it. This distinction has been used to identify 1916's so worn that the final digit was obscured.

In addition to possibly four Matte Proofs of regular design, there are one or two others lacking MacNeil's initial M on wall right of date, and in the Smithsonian Institution is at least one with initial M (adopted design) and a reverse with laurel branches where the stars normally would come. One other is reported with the same eagle die muled with the obverse without M. Specimens of all these are reported to survive in private hands, and it is also possible that specimens of the pattern without the M may repose in private collections unrecognized. There has been no legislation definitely establishing whether it is legal to hold or buy or sell any of these patterns, so that most transactions including them have been unpublicized.

In 1917 a total of some 12,253,200 were minted of the MacNeil design of first type without stars below eagle, from all three mints: a higher total than for any previous year since 1909. Public attitude to the new designs was favorable except in one quarter: the followers of the late and unlamented Anthony Comstock were beginning to raise a furor over the immorality of the coins, which had shown Ms. Liberty's (Doris Doscher's) bosom in exact detail. When their congressional supporters managed to reach the Treasury Department, the end was near for MacNeil's original conception.

Many of the 1917 Type I coins were saved by the public as supposedly first of their kind; evidently comparatively few had seen the 1916's. However, apparently at least four rolls of 1916's were saved, all long since singly dispersed. Type 1 quarter dollars of 1917 show the celebrated breast; the "cover-up" of the bosom in the same year is termed Type II.