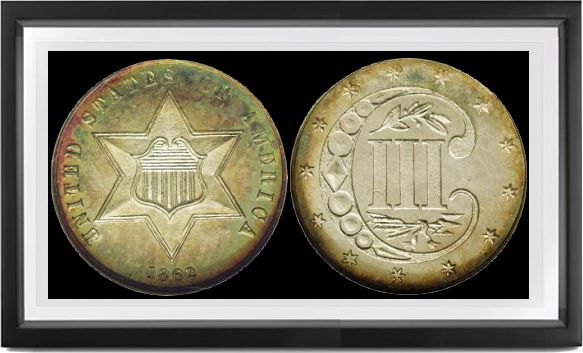 THE DIES FOR 1859 and all later years through the end of the series (1873) were made from new hubs prepared by Longacre, probably with assistance of Anthony C. Paquet, at request of Mint Director Snowden. The reason for the change was almost certainly improvement in striking quality, as with the changes in designs of cents, half dimes and dimes.

The most notable features of the new modified design or Type Three: narrow letters spaced well apart; smaller numerals (those of 1860-63 are the smallest on any denomination in the United States series, aside from the gold dollars which used the same logotypes); two thin closely spaced raised outlines to star.

Mintages were smaller in Type Two, yet the coins of 1859-62 are far more often seen in all grades than are the 1854-57. The reason appears to be a combination of better wearing quality, better striking quality, and hoarding inspired by the suspension of specie payments in December 1861, and the resulting shortage of all kinds of coin. The last-named cause also resulted in less and less silver being deposited at the mint for coinage. The later dates 1863-73 are therefore represented in collections almost entirely by Proofs, a few hundred being struck each year for the sets; business strikes 1863-72 were made in minimal quantity and are very seldom met with.

For 1859-60 only minimal positional varieties are found. The date 1861 collies double-cut (very rarely), heavy or light, and similar variations are found in 1862. There is also an overdate, 1862/61, generally coming with a die break up through first 1 into field towards star; it is rare but not extremely so.

Large quantities of counterfeits were made dated 1859-62, the vast majority of them dated 1861 and struck in German silver. The numerals are invariably too big; workmanship is good but not of mint quality. The 1863 was not known to exist in Uncirculated (non-proof) state prior to the mid 1950's, and it is still very rare so, almost in the same class as the later dates Uncirculated; presumably most of the 21,000 business strikes were melted. The Proofs are usually found with thin numerals. A variety with extremely heavy recut date "3 or 4 examined so far—proved to be 1863/62 and was first publicized in New Netherlands 57th sale; by evidence of successive states of the reverse die it shared with other coins dated 1863 and 1864, it has been since established to be a restrike made between July 12 and Aug. 30, 1864.

Only one obverse die for 1864, base of 4 being recut; the rare business strikes generally have a crack from rev. rim about 4:00. Restrikes from a different obverse die (no recutting on date) exist for 1864 in copper and aluminum and possibly also in silver. Proofs of 1865 often show minute recutting on 5, business strikes show heavy recutting on 65 and are very rare, later ones have the same die relapped, the recutting mostly gone, and a crack developing left of date. Some late Proofs were made from this cracked die. A minority of Proof 1866's have final 6 heavy and cut over an indistinguishable digit. Varieties of 1867 are slight; no Uncirculated business strike is reported. Proofs of 1868 come with recut or normal date; no Uncs. reported. Two varieties of 1869 Proofs, one with a faint overdate (4 or 5 known); no Lines, of this date or 1870-72 inclusive, save for an 1870 in New Netherlands 54th sale. It is believed that most of the 1872 business strikes, and some of the Proofs of 1871-72-73, were melted with other obsolete coins on and after July 10, 1873, after the effective date of the Mint Act of 1873 which abolished this denomination.

Trimes " never so called in their lifetime except by Mint Director Snowden, who invented the name—are a difficult series to complete, and even today are grossly undervalued in full Unc.