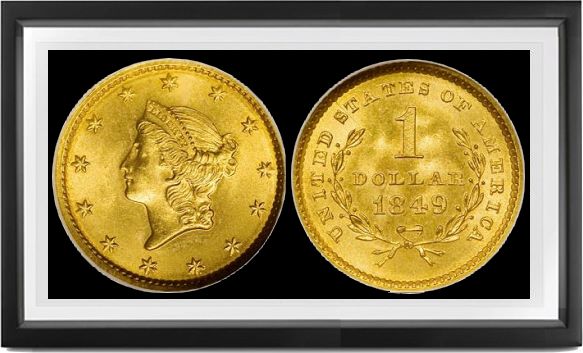 THOUGH SILVER DOLLARS HAD REPRESENTED our nation's monetary unit ever since the first year of official silver coinage (1794), nobody got the idea of a gold dollar until about 1831. Alt Christoph Bechtler, the head of a family of German immigrants, opened a jewelry shop in Rutherfoalton, North Carolina, in 1830. Discovering that the main local medium of exchange was gold dust and gold nuggets, this area being then one of the major gold-producing localities in the USA, Bechtler decided to take advantage of the situation, Transporting local gold to Philadelphia was then very risky owing to bandits and hostile Indians, so only a small fraction of the bullion ever got to the Mint. Bechtler advertised on July 2, 1831 that he would coin the local gold dust and nuggets. Between then and 1842 the Bechtlers' total output exceeded $2-million, probably over half of it in one-dollar coins. Many of these, issued 1831-34, reading C:BECHTLER.RUTHERF: 30 G(rains).* N:CAROLINA GOLD ONE DOLLAR, began to reach the Mint in the great remeltings of gold that began after August 1, 1834; no official notice could be taken, as the coins were full weight and of good fineness. The coins survive today in notable quantity (the Walton collection contained 13), in all grades of preservation, proving that a public need existed for such pieces. Why did the Mint issue none?

Congress, alleging instead a proposal for international gold coinage (the dollar was near in value to a dozen European monetary units), included a clause authorizing mintage of gold dollar coins in an 1836 hill, only to meet total opposition from Mint Director Patterson, All that remains today of the proposal is a tiny handful of patterns dated 1836, showing a Liberty cap in rays, with reverse bearing 1 D within wreath; these have dies aligned head-to-toe as on modern U.S. coins.

At Alt Christoph's death (1842) his son August continued coinage (1842-43) in his own name, in still larger quantity, mostly in gold dollars reading A. BECHTLER. 1 DOL:* CAROLINA GOLD. 27 G(rains). 21 C(arats); many thousand still survive, the Walton collection containing over 120. In January 1844 the House Ways and Means Committee again brought up the proposal to make gold dollars. Patterson furnished them with a few more patterns (from the 1836 dies but with the dies aligned the other way), indicating that these could be readily counterfeited in gilt silver (a few mint-made experimental pieces of this kind survive), but alleging falsely that no demand existed for such pieces, the Spanish and Colombian 1/2 escudos of similar value not having been coined for over 20 years.

Nevertheless, the proposal came up again at the end of 1848, in response to the immense supplies of gold bullion coming in from California, which were already lowering the market value of gold in terms of silver—or, conversely, raising the price of silver enough to cause bullion dealers to buy up silver dollars and halves for remelting as worth well over face. Congress passed the bill authorizing gold dollars and double eagles or $20 coins as of March 3, 1849. After Gobrecht's death in 1844, James Barton Longacre obtained the appointment as Mint Engraver through Senator John C. Calhoun. Patterson wanted no Engraver at all, lest such an outsider interfere with the lucrative business of medal-making privately operated in the Mint by his friend Franklin Peale. Despite Peale's officious opposition, Longacre managed to complete master dies for the gold dollar as of May 7, 1849, and on the next day a half dozen or so Proofs and 1,000 business strikes were issued, the first of over 11,719,000 made of this design, in Philadelphia and four branch mints, though June 17, 1854. The coins for most of that period formed the bulk of our nation's circulating medium between the 3 cents and $2.50 denominations.

After the issue of larger thinner gold dollars began in 1854, banks were under orders to return the small size dollars to the Mint or the New York Subtreasury. By 1861, some eight-million out of the original 11-million-plus mintage had reached the Subtreasury, and Mint Director Snowden ordered them shipped to Philadelphia, where they were melted down for recoinage into $1, $21/2 and $20 coins. Many of the survivors have been converted into jewelry or included in later remeltings, less than 1% surviving today in all grades.