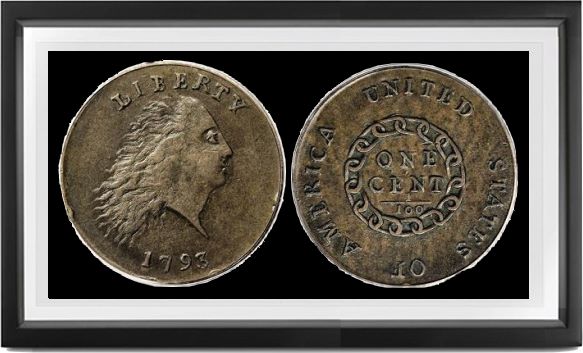 ASIDE FROM THE "REAL CENT as ordered by Congress" of December 1792—the handful of "Birch" cents, struck on the 264-grain standard with plain edges and with two different edge letterings—the first regular cents to be issued by the government of the United States on its own machinery and within its own premises, was the group of 36,103 Chain cents struck at the infant Mint between March 1 and 12, 1793, from four obverse and two reverse dies.

The dies are with good reason ascribed to Henry Voigt, who is also supposed to have made the dies for pattern small cents of 1792—the "Silver Center" cents; the heads on those and the 1793's are of similar style, and equal crudity. Voigt was properly Chief Coiner, and considered to be the ablest man available in this country or overseas for the post, but the blacksmith's and mechanic's skills appropriate for a coiner are quite different from those needed in die sinking. This is why his designs were kept so simple. All necessary lettering and numerals could be safely entered into the die blank by an apprentice, once the layout drawings had been assembled and imparted to the surface by transfer wax; the punches could be cut by any assistant (the name of Timothy Bingham has recurred in this context); and if the head of Liberty were to have any appreciable relief detail (which could not be much, given hand-operated presses), then the reverse would have to be simple, open arid of much lower relief, with plenty of blank or nearly blank space in central areas. The chain device was obviously a reference to that found on Continental pewter dollars and FUGIO cents of 1787, though now with the issuing authority spelled out as the UNITED STATES OF AMERICA. Use of the decimal fraction 1/100 appears to have been aimed at people who could recognize numbers but not read words, a surprisingly large category at the time.

However, the chain appears to have been a rather unfortunate choice of device. Sheldon quotes some unnamed critic as alluding to "Liberty in chains" (from the clashmarked chain visible on many Sheldon 3's before Ms. Liberty's neck and face?), and another gibe at the "wild squaw with the heebie jeebies," antedating by over a century Billy DeBeck's supposed coinage of the term in Barney Google. (Unfortunately Dr. Sheldon had misplaced the reference when I asked him about it in the 1950's.)

Unlike all the later cents prior to 1909, the border of the 1793 Chain cent consists of a plain raised lip without beading—the beads were added on the 1793 Wreath type cents because this plain border wore down too fast. Die steel was of poor quality; obverse 3 lasted not over 20,000 impressions, reverse C not much over 25,000, other dies far less. The AMERI die cracked and heavily broke over TAT (examples in ANS, Bitler, Johns Hopkins and other collections). Hair is disheveled giving an impression of crudity despite extremely fine lines.

Of the 36,103 coined, probably about 3% survive—between 1,000 and 1,100 at the outside. Of these possibly a dozen qualify as full Uncirculated, at least a dozen more in AU and still more in EF, many being saved as first year of issue though not nearly as many as with the Wreaths.

Less than a week later, The Mail, or Claypoole's Daily Advertiser, (Philadelphia, March 18) ran this story, promptly copied in other papers up and down the coast: "The American cents â€¦ do not answer our expectations. The chain on the reverse is but a bad Omen for Liberty, and Liberty herself appears to be in a fright. May she not justly cry out in the words of the Apostle,'Alexander the coppersmith hath done me much evil: the Lord reward him according to his works!" Everyone knew that this barb (slightly misquoted from 2 Timothy 4:14) referred to Alexander Hamilton, the illegitimate mixed-race statesman commonly believed to be in charge of the Mint. This was Director Rittenhouse's cue to order a change in design for the next cents to be struck. And so, for the first (but not the last) time, bad newspaper publicity forced the Mint to abandon an adopted design, unintentionally creating rarities in the process.