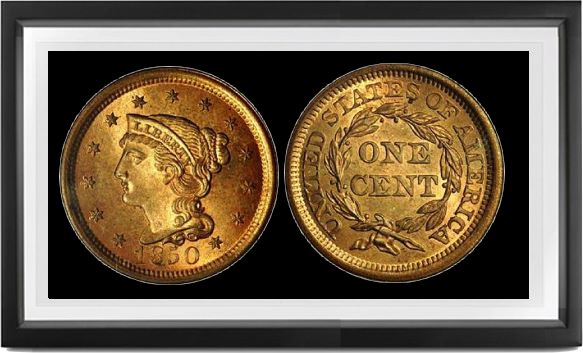 CHRISTIAN GOBRECHT'S "BRAIDED HAIR CORONET" is a copy of the head of Venus in Benjamin West's "Omnia Vincit Amor" (sold to an American collector in 1839, and reproduced by Cornelius Vermeule in his recent book Art in American Coinage). Letters are smaller than on any previous type since 1793. Dies are completely hubbed except for the date, and the new steam press was strong enough to eliminate the need for reverse hand finishing. This head was repositioned among the stars in 1843, a new complete hub with larger letters being introduced in the same year though before the new head, so that in 1843 we find a dozen or so varieties of the Type of 1842, two with obverse of '42, reverse of '44, and three with Type of 1844, which version remains standardized through 1857 without any further modification. Varieties from here on consist mainly in minute variations in the position of the date, with occasional equally minute doublings, die file marks, chips out of die, rust pits, cracks or crumbling. Overdates are known for 1840, 1849, and (through die blunder in which the date logotype was first entered rotated 180 degrees, i.e. upside down and backwards) 1844 and 1851.

There are also some plainly repunched dates in the mid 1840's, testifying to the new Engraver's incompetence at this blacksmith's chore. James Barton Longacre (1795-1869), hired through political influence as Engraver on Gobrecht's death in 1844, had also begun as a portrait engraver on bank note plates, but Gobrecht's mechanization program had left the Mint with no need of an Engraver except when new designs or denominations would be necessary, which left Longacre with nothing to do but punch in date logotypes until 1849 when he had to design the new gold dollar and double eagle.

In the late years the most outstanding varieties include the upright and slanting 5's of 1855-6, the "Twelve Stars" 1855 (N-10, generally seen red Uncirculated, prooflike), and the large and small dates of 1857. The Twelve Stars coin (from die failure) is very scarce and we suspect that most were saved as curiosities. The date 1857 was melted in quantity at the mint when the denomination was abolished that year (in favor of the nickel composition Flying Eagle cent), but several collectors hoarded 1857's so that the date is not exceptionally rare except in full red Uncirculated state. Other dates in this period are obtainable for a price in red Uncirculated due to hoards: 1850 N-7, 1851 N-2, 1852 N-3, 1853 N-25, 1855 N-4, 1856 N-14. (N designations refer to the varieties, for dates indicated, as described by Howard R. Newcomb, U.S. Copper Cents 1816-18.57. N.Y. Numismatic Review, 1944 and later reprints)