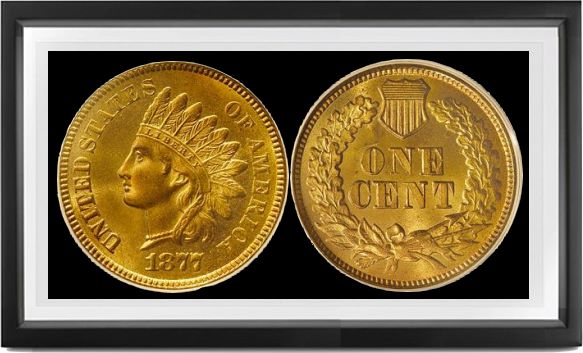 PARTLY OWING TO DIRECTOR POLLOCK'S opposition to nickel as a coinage metal (based largely on its physical properties, which made it difficult to work, and caused rapid deterioration of dies), but mostly because the price of nickel metal was going up so steeply as to make cents worth over their face value as bullion, the decision was made in 1863 to substitute some other metal for nickel.

The commercial community of the 1860's accepted copper or bronze cent-size tokens. This induced the mint Director to propose French bronze at this weight (95% copper, 5% tin and zinc) as the proper alloy for the new nickel-free cents.

Accordingly, the Mint Act of April 22, 1864 authorized this coinage along with the issue of 2 cent pieces of the same alloy and proportionate weight. These pieces were to be legal tender, which none of their predecessors had been: a provision of dubious constitutionality.

The first cents coined in 1864 under this act had the fairly blunt bust point and no engravers initial. Later ones (18 to 20 obv. dies) showed a narrower, sharper bust point and Longacre's initial L on ribbon: the famous 1864 L cents. These are common in ordinary grades—mostly so worn that the L cannot be clearly made out—but scarce in EF to Unc. Compared to somewhat over 370 Proof nickel cents issued with the sets (230 sets in February, 140 in March), and 100+ Proof bronze cents without L issued with the sets of July 1864, only a handful of Proof 1864L's were issued, less than 10 being now traceable.

The L continues on all "Indian" cents issued through 1909. Those dated 1865 come with two styles of 5, the plain 5 (found on Proofs and many Uncs.), and the fancy top 5 (found on the very rare 1865/4 and a minority of business strikes with normal date). Other varieties through the 1880's consist entirely of re-cut dates aside from the rare 1888/7 and the usually misidentified 1869/8; the real overdate shows part of loop of 8 at lower left, two obverse dies being known.

The 1873 comes with closed 3 on all Proofs and a minority of business strikes, the rest having the open 3. Closed 3 coins occasionally showing doubling on LIBERTY (the same principle as the famous 1955 Double Die or Shift cent).

Even re-cut dates become more and more seldom seen after 1876, though the year 1894 provides a spectacular instance of considerable rarity. Later dates through 1909 are completely stereotyped, the main interest being afforded by the 1908 S and 1909 S, which were the first branch mint cents.

The whole series of bronze Indian cents was for some years under a cloud owing to a large quantity of counterfeits of 1877 and 1909 S, and a smaller number of 1909 coins with spurious mintmarks added in the proper place. The fake 1877's differ in details of date—largely position of final 7—from the genuine; the others can be identified without much difficulty, but many collectors were still afraid to handle them for fear that they might be fooled.

It is possible that more overdates might eventually be discovered, since comparatively few collectors look at all closely at their specimens of this humble series. This is why the 1865/4 was not discovered until the middle 1950's, nor the 1873 Double LIBERTY. The field deserves further research; as it was to the mint's advantage to maximize stereotypy, so it is to the collector's advantage to find where the mint had failed to do so. There is more fun in the game that way.