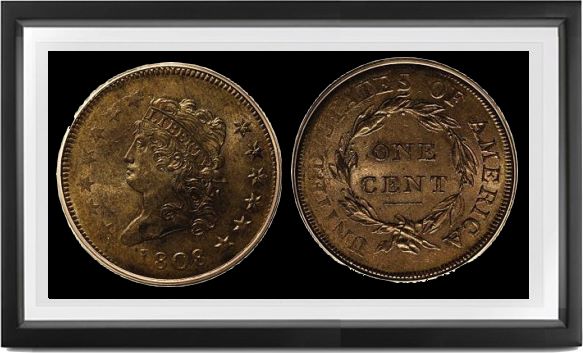 PART OF JOHN REICH'S ASSIGNMENT at the Mint was to improve designs on all current denominations (he omitted only the silver dollar and eagle, which were after all noncurrent after 1804). His contribution to the cents was the design copied a year later on the half cents, continued only to 1811 on the latter and through 1814 on the cents, revived in 1825-36 on half cents and 1834-38 on gold coins. We have already seen how the name "Classic Heads" was proposed in 1868, forgotten in favor of an erroneous name best forgotten, and lately revived; we have also seen a probable reason for its abandonment: its masculine character, the fillet being a prize worn by boy athletes who had won in town games, but never by women.

The relatively few dies of this type appear to have been more durable than any previous or most later ones into the 1830's, averaging a couple hundred-thousand impressions apiece—till then unprecedented. As a result, the coins of this design are, in worn state, commoner than earlier ones or many later ones, though in Uncirculated condition they are difficult enough to find. (There was a tiny hoard of 1810 S-285, possibly a dozen of twenty in all, some of them red and prooflike; and another of 1812 S-289 and 290, mostly brown AU's.) Many are unevenly or even weakly struck, especially of 1808-9, 1813, and the planchets are characteristically dark and often porous. (S-numbers indicate large cent varieties, 1793-1814, described by William H. Sheldon in Penny Whimsy, N.Y., Harper & Bros., 1958 and later reprint.)

For the absence of mint red specimens of the common 1814, however, the explanation is completely known and curious, During the War of 1812 an embargo prevented the Mint from obtaining any more copper blanks from Boulton & Watt, and the cent coinages of 1812-13 were made from the stock on hand. In 1814, the Treasury Department ordered the Mint Director to coin no more cents until further notice. No half cents or dimes had been coined since 1811, no quarter eagles since 1808, no quarter dollars since 1807, no half dimes since 1805, no eagles or silver dollars since 1804, (the silver dollar being Bolender 6's of 1802 and 1803, of course), and the few banks lucky enough to obtain half eagles and half dollars hoarded them. The coin shortage was acute enough that private entrepreneurs (said to be working out of Mexico) had already begun emitting immense quantities of white metal half dollars of their own manufacture, mostly Flowing Hair design, with a variety of dates from 1787(!) and 187 (!!) to 1814; one of the more grotesque of these is illustrated in Taxay's Counterfeit, Misstruck and Unofficial U.S. Coins, others by J. J. Ford Jr. in Coin Collector's Journal, November 1950. For unstated reasons, probably unavailability, of notes of proper denominations and unwillingness to use precious metal, the Treasury also refused, all year long, to issue warrants to the Mint Director authorizing him to pay his workmen. After eleven months of futile letterwriting, Director Patterson in December 1814 ordered Chief Coiner Adam Eckfeldt to stamp all the remaining copper blanks into cents, and pay the Mint workmen their back salaries in this form—which is why no full blazing red 1814's survive; all were spent at once.

No cents were coined in 1815 as there were no more blanks, and the Mint was not about to go back to buying clippings and scraps on the open market for melting and rolling and cutting into planchets. Many alterations dated 1815 are known; these are usually from coins of 1813, more rarely from 1845's (!) or 1816's, and of course no genuine prototypes could exist. As soon as the War of 1812 was over and the embargo lifted, the Mint placed large orders with Boulton & Watt and other Birmingham coiners for cent blanks, Boulton getting the majority of the Mint's orders until well into the 1830's. Robert Scot took advantage of the hiatus in cent coinage to make a new head for the design, which was the opposite of an improvement but at least must have silenced criticism of the Mint for its coins showing a Greek boy athlete as Lady Liberty. Anything would have been better than more newspaper attacks.