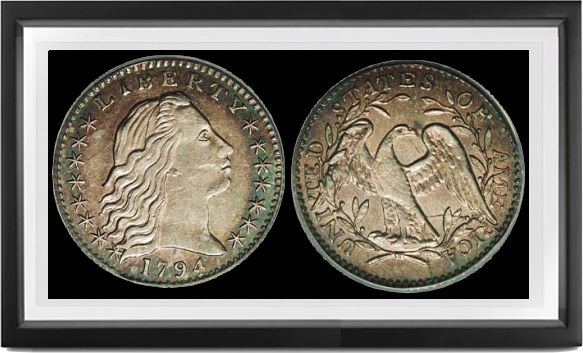 FOR REASONS UNKNOWN, THE BIRCH design origin-ally used on the half disme of 1792 was abandoned, and a less imaginative conception adopted for 1794 silver issues, copying that found on the half dollar and dollar of the same date. This design is attributed to Robert Scot. The head of Liberty is vaguely reminiscent of that used on the Wreath Cents of 1793, but in about the same way that the image of the Lincoln Memorial on the cent is reminiscent of the actual building on the Washington Mall.

The coins dated 1794 were made from three pairs of dies muled in four combinations, in the order Valentine (U.S. Half Dimes, ANS, 1931) gives:

3. Close crowded date, a berry almost touches I of UNITED. Of about equal rarity to the last.

4. Closest date far from bust; F rests on a leaf. High Rarity-4. Most of these V-4's were struck after the V-1 and V-10 of 1795; all 1794-dated half dimes were delivered in calendar year 1795, and are believed to have been included in the delivery of 7,756 pieces, March 30, 1795. There are one to three presentation pieces " beautiful well struck prooflike gems " known of each of the varieties, and over a dozen V-4's in Mint State " evidently saved as first year of issue.

Of 1795-dated half dimes (78,660 minted) ten varieties exist, mostly of great rarity; only the last three to be listed here are ever found in choice condition, and those evidently owing to a small hoard found in the 1880's, possibly as few as 25 or as many as 100 Uncirculated specimens. The varieties are here listed in a rational sequence for easy identification, partly in the hope of stimulating interest in the series, as they are nearly as variable as the copper cents-and even more elusive.

3-B. (V-2.) Date straight, 1 high and leaning to the right. End of bust broken off right of 5. Berry below left foot of first A of AMERICA. Usually with a bisecting crack from the rim to R to the hair to the edge just to the right of lowest curl point. High Rarity-6.

7-D. (V-6.) Same obverse as last. Reverse: Berry about touches base of first S. Obverse with late cracks as above. Low Rarity-4. Quite a few Uncs., many flat strikes.

So far as we know there has never been a complete set of the 14 varieties of this design, but some of the rarities may turn up identified only as "1795," as formerly with the cents, half cents, and larger silver.