THE FRANKLIN HALF DOLLAR 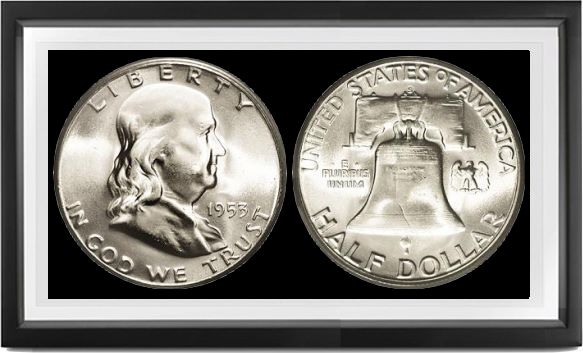 THIS WAS THE LAST WORK of its designer, Mint Engraver John R. Sinnock; he completed the obverse and reverse models only a few weeks before his death in May 1947, at the request of Mint Director Nellie Tayloe Ross. The Franklin portrait for a half dollar was supposedly a long term project of "Ma" Ross; it could have been legally put onto this denomination at any time after July 1, 1941, but evidently the greatly escalated demands for coinage during World War II occasioned the delay.

Acting Director Leland Howard, on November 17, 1947, shipped a lead impression of an obverse, with date represented by XXXX, to the federal Fine Arts Commission for their approval. On December 1 the Commission chairman, Gilmore Clarke, wrote back to Mrs. Ross, disapproving the obverse and reverse models, which they had somehow managed to examine. Their grounds for disapproval were the small eagle at right of the Liberty bell (which eagle was included solely because the law required it), and the plain crack in the bell, because forsooth "to show this might lead to puns arid to statements derogatory to United States coinage."

Nevertheless, crack and all, the Treasury Department approved the design, without setting up the competition which the Commission had recommended, and the coins went into production in May 1948. At a dinner party for local VIPs, some of the new halves were given out, the evening before the first lot of them were shipped to the Federal Reserve Banks. These VIP presentation coins are ordinary Uncirculated examples, not distinguishable from any others of 1948; no Proofs were to be made until 1950.

The Commission's judgment on the eagle was apparently justified. On Proofs of 1956-63 and some production coins of 1958-59, a new reverse hub was put into use; this has the eagle in higher relief, with only three feathers visible to left of perch. (Earlier coins since 1948 showed eagle in low relief, with four flattened feathers to left of perch.) And on some production coins of 1959 and possibly later years, a third reverse hub is found; this has eagle again in low relief, but only three feathers left of perch. Not that any of these improvements helped much, as the eagle is seldom very plain.

However, the derogatory remarks feared by the Commission did not arise from the crack in the Liberty Bell, but only from Sinnock's initials JS. Ignorant superpatriots, fearful of Communists under every bed, misidentified these once again as designating Josef Stalin, and again rumors had to be squelched.

The coins were made in large quantities, and plenty were saved in roll and bag lots, so that no officially recorded dates or mint marks can be called scarce. There are no significant varieties aside from the hub changes above mentioned; mint marks vary microscopically in position. It is possible that some dates where more than one reverse hub variety is found may prove to contain scarce varieties; research is still far from complete.

However, there is one major mystery about the Franklin half dollar, which official press releases from the Mint have done nothing to clear up. Supposedly none were made in 1964, the Kennedy halves released on March 5, 1964 being the first coins of this denomination made in that year. Nevertheless, a New York City dealer of unimpeachable repute told me on my return from an out-of-town journey that on one day during my absence he had held a client in his office for several hours, desperately trying to reach me by telephone; the client had a Franklin half dollar dated 1964, for sale, but they did not wish to conclude the deal without my authentication. The client has never returned, nor has any such coin since been shown anywhere, nor has there been any announcement of discovery of counterfeits bearing this date. If genuine, this would be the discovery of the century.

Click here to view our current inventory of Franklin Half Dollars