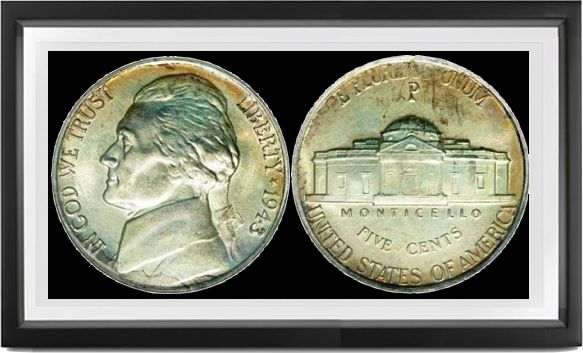 AS SOON AS THE ACT OF SEPTEMBER 25, 1890 made it possible to do so, Treasury officials opened a competition for a new design to replace the Buffalo nickel—apparently wishing to create a complete series of coins portraying presidents. Competing sculptors submitted two plaster models, one of an obverse to portray Thomas Jefferson, the other to show a view of his home Monticello.

On April 24, 1938 the winner was announced to be Felix Schlag. However, the federal Fine Arts Commission rejected Schlag's modernistic side view of the building, demanding that it be changed to a front view and squeezed far more closely together to leave room for the building's name. Schlag complied—refusal would have meant forfeiture of the $1,000 prize—and production of the coins began during the second week of September 1938.

There have been many minor changes in the portrait since 1938, mostly in details of Jefferson's peruque and its ribbon. Proofs of 1938 have a much smaller star between Y and date than later years; coins of 1957-58 have a much larger star than do any earlier or later dates. It is very unusual to find a nonproof Jefferson nickel on which all the steps can be counted; generally they are not well struck up, both steps and windows between pillars being weak and indefinite.

Other varieties either arise from individual punching-in of mintmarks, or from vicissitudes in hubbing of reverses. In 1939 coins are known with doubled MONTICELLO, on the same principle as the famous 1955 cent—plainest at the building's name, less so at most other lettering. This is rare, and in Mint State apparently unknown. In 1941 both large and small S mint marks are known, the former scarcer. There is also a 1942 S of the same type—tiny S right of building—ex Frith, Bashlow collections; and a 1942 D with mintmark first punched horizontally (curve side clown) then corrected (very rare). Two true overmintmarks are known: 1954 S over D (also very rare) and 1955 D over S, the latter apparently a result of economy when Mint people realized that the San Francisco branch was to be shut down without making more nickels.

In 1966 the designer's initials FS were added below bust, thanks to a campaign started by one of the coin trade papers. Beginning in 1968, mint marks—larger than before—were placed on obverse just past date.

Aside from the mentioned overmintmarks and other items called rare above, the most coveted dates are 1939 D, 1939 S (both pumped early into circulation and widely dispersed) and 1950 D (almost the entire mintage hoarded in roll and bag lots, almost never found in circulation). The dates 1971 S and 1972 S were issued only in Proof sets; some 1,655 Proof sets in 1971 contained nickels from which the mintmark had been omitted by error, and they are highly coveted.

During early 1942, nickel became a strategic metal, having many uses in munitions making, Attempts to discover a substitute for the standard 25% nickel; 75% copper alloy made it apparent that a nickel-free alloy would run into the obstacle of pay telephones and vending machines because it would need the same electrical resistance as the alloy in use since 1865 and to retain the same weight as before. The authorities finally found an alloy consisting of 56% copper, 35% silver, 9% manganese satisfied the electrical conductivity requirement, and accordingly it was authorized by the Act of March 27, 1942. The new "wartime silver" coins differed from earlier nickel 5 cent coins in having the mint mark far larger than on any other American coins, and placed directly above the dome, so that they could be identified at once in the Mint. They are the only American coins of any denomination to bear the mint mark P for Philadelphia.

A perfectly brilliant pristine Mint State specimen is brighter, whiter than its nickel counterpart, and can be identified even blindfolded by the ring. All "wartime silver" coins produce a note which is markedly different from the nickel's note when balanced on a fingertip and tapped gently with another coin. This fact enabled authentication of a very rare class of mint errors. These are the 1942 P and 1943 P "nickel nickels" and 1946 "wartime silver nickels"—each being struck on leftover blanks from an earlier year. Four to six are known of each, and they received large-scale publicity about ten years ago.

Very minor "shifts" or doubled dies are known for several of the eleven date-mintmark combinations of this series; the most notable, and probably the rarest, is the 1945 P with doubled MONTICELLO, some other reverse letters being affected. Proofs are known only of the 1942 P, some 27,600 being struck, many being hoarded as a single-year type issue in Proof State, many others being added to the regular 5-piece Proof sets earlier minted.

Click here to view our current inventory of Jefferson Nickels