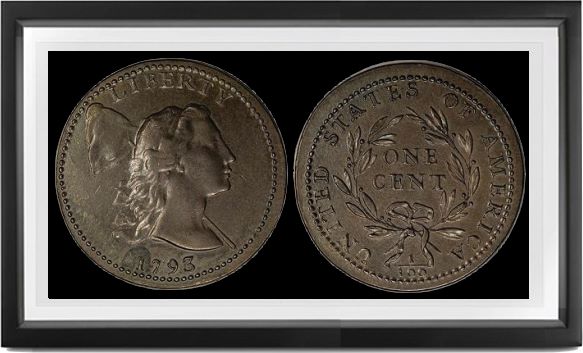 DURING JOSEPH WRIGHT'S LAST MONTH of life, before he succumbed in one of Philadelphia's then annual yellow fever epidemics, he designed a new style of cent, deriving at some distance from Dupre's LIBERTAS AMERICANA medal though with head facing right. This head is more delicate in detail than any earlier or later ones; the cap shows behind her, the pole along bust line. For reverse Wright drew a simple two-branch olive wreath, the fraction below. This famous Liberty Cap design was to be copied successively by Robert Scot, J.S. Gardner and others, this style of wreath persisting on cents through 1807 and later recopied on the UNITY STATES cents dated 1783 but struck between 1810 and 1820

Three obverse dies and two reverses were completed, between late July and early September 1793, the heads from a single hub (containing head and cap but no pole), the pole, letters, numerals and border beads on both sides added by hand, the wreath being constructed from individual leaf and berry punches. Planchets are broader and thinner than any heretofore, so that the coins ring better than Chains or Wreaths.

On September 18, 1793 came a single delivery: 11,056 pieces, The true sequence of varieties is controversial, but at least we can say that the famous Bisecting Break, S-14 (C.1.3L) came first, the S-15 (C.14K) last, the others in between with several back-and-forth intermulings. Both reverses gave way in center, Reverse K almost immediately, obliterating ONE CENT. This fact makes many of these look more worn than they actually are. Only a little over 2% survive in all, possibly eight in AU or better, none in full Uncirculated, the vast majority badly worn. These are the most prized of all large cents. (S-numbers indicate large cent varieties, 1793-1814, described by William H. Sheldon in Penny Whimsy, N.Y., Harper & Bros., 1958 and later reprint.)

The identical obverse hub was used for the first three obverse dies of 1794, the famous "Heads of 1793," S-17 to 20; though Scot abandoned border beads in place of heavy serrations, and his wreaths are cruder. The majority of alleged examples offered are misattributed. Of the 11,000 coined, January 13, 1794, under 3% survive, mostly well worn.

The new lettered edge 1795's (37,000 coined from three pairs of dies, 2% surviving) were delivered December 1, 1795, coinage stopped at once as every 100 cents cost the Mint $1.22 to make. Washington verbally authorized reduction of cent weight from 204 to 168 grains, after which some 501,500 were struck (all dated 1795, at least 3% surviving) through March 31, 1796—the very day Gardner resigned because of too small pay. The famous Reeded Edge, S-79, was an abandoned experiment; the "Jeffersons" (S-80, NC1), John Harper's patterns for a contract coinage when the Mint's congressional opponents looked as though they might win.

Scot at once replaced the Gardner 1795 head with a new hub of his own, too high in relief so that most 1796 Liberty Caps are so weak in central reverse that ONE CENT cannot be made out! Six obverse dies were sunk from it, used in 10 combinations to make 109,825 coins, May 12 through June 8—the last use of the various copies of Wright's design on cents. There 1796's deteriorated quickly, many being struck on poor rough blanks, others on lenticular blanks on which the borders did not come up well so that the coins wore down too fast. Only about 2½% survive, most of them well worn; the set of ten varieties is very difficult to complete in acceptable condition, even though none can be called extremely rare.