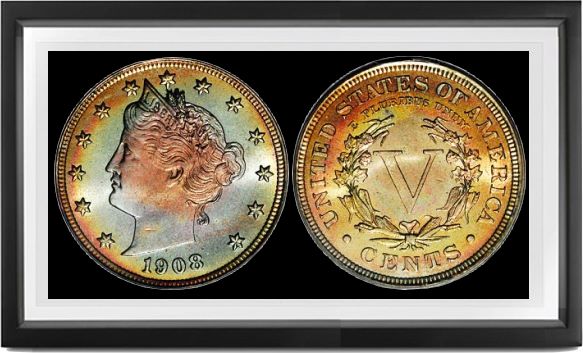 AFTER CHARLES E. BARBER'S second proposed reverse, with the word CENTS at bottom and Latin motto above wreath, was adopted in 1883 to replace the centless type, there were no further changes in the type until its abandonment in 1912.

Varieties are few and confined entirely to date recuttings, aside from one overdate. The 1884 sometimes shows a recut 4, the 1886 Proof sometimes has 86 recut, the 1888 Proof sometimes shows plain recutting on base of 1, the 1894 Proof occasionally shows 4 first cut a little low and to left, then corrected, and so forth. Most of these varieties have never been published in any catalog; all are scarce, some rare.

The major rarity in this series, however, is the 1899/98, (99 over 98). Until three years ago this was represented by possibly only a dozen or fifteen examples in Good or VG, identified by second 9 much wider and rounder than first—and solid, both upper loop and lower space being filled. In recent years three in EF to Unc. have turned up from this elusive die, showing the 8 plainly within and around 9—this 8 being of course wider than the 9. Other overdates may exist.

The available Uncirculated examples in the 1880's and 90's, as well as many later ones, come from rolls saved by the late Wayte Raymond, William Pukall and A.C. Gies through the 1930's and 40's, most of which were subsequently dispersed. Raymond marketed various types of coin albums and published catalogues in order to create and develop a market in single coins at retail; to him this was the only justification for hoarding rolls.

In 1912, the last year of the series, for the first time in the history of this denomination, working 5 cent dies were shipped to the Denver and San Francisco Mints. Many Uncirculated specimens were saved locally of both, though far more from Denver. The San Francisco Uncs. invariably show weakness on forelock and other hair. Counterfeits have been made by inserting S mintmarks (from later nickels) onto genuine Philadelphia coins, and sometimes by altering D coins.

As of December 13, 1912, coinage of this denomination ended at Philadelphia, per letter of that date to Superintendent John H. Landis from Mint Director George H. Roberts: "Do nothing about 5 cent coinage for 1913 until the new designs are ready for use." Nevertheless, one Samuel W. Brown of North Tonawanda, N.Y., later mayor of the town, formerly Assistant Curator of the Mint Cabinet and (in 1912-13) Clerk or Storekeeper of the Mint, advertised in the Dec. 1919 Numismatist to pay $500 apiece for 1913 Liberty Head nickels, upping the offer to $600 in the January 1920 issue. He exhibited five in all at the 1920 American Numismatic Association convention. In January 1924, Philadelphia dealer August Wagner offered them for sale; they went to Col, E.H.R. Green, son of Hetty Green, thence (1942) to B.G. Johnson, who dispersed them. The presumption is that they were originally struck clandestinely on behalf of Brown, who waited until certain people had retired from the Mint service to pretend to buy his five through appropriate advertisement. Through B. Max Meld's advertising campaign, the 1913 five cent piece has become probably the most famous of all nickels, certainly the most controversial.