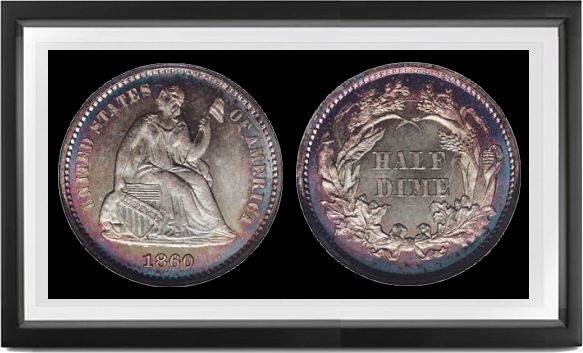 FROM THE ABORTIVE GROUP of pattern half dollars of 1859 only one design actually managed to win official approval. This was "Newlin's Wreath of Cereals," one of Longacre's more fanciful wreaths including corn, wheat, maple (?) and oak. Half dimes issued on and after Jan. 1, 1860 to the end of the series (1873) bore this wreath, as did dimes 1860-1916 in several minor modifications. The obverse no longer showed stars, but the inscription identifying our nation; the effigy of Ms. Liberty was again slightly modified.

Coins of this type were issued from the Philadelphia Mint in all years 1860-73, though the majority of the business strikes 1863-70 appear to have been melted or exported; for long no Uncirculated 1864's were known to exist, the date being thought a Proof-only year, and the other dates 1863-67 are very rare in Mint State, far more so than in Proof State, as many of the Proofs were saved by collectors. The New Orleans Mint issued a quantity in 1860 only; two pairs of dies were shipped for 1861 use, but no coins are known from them despite the New Orleans Mint's having ample bullion before and after its seizure by the Confederacy.

The San Francisco Mint issued half dimes of this design 1863-69, 1871-73. The vast majority of them appear to have been either melted or used for jewelry; many survive today with traces of shanks, mute testimony to their having been used as buttons, tie tacks, cuff links or the like. Uncirculated specimens 1863-67 are extremely rare.

Probably the greatest rarity in the 1860-73 series is the overdate, 1865/63 S, first publicized in a Frossard auction of 1894, but not again coming to collector attention until the New Netherlands Coin Co. 57th auction, December 1963, at which time an Uncirculated specimen realized five times the current Guidebook price for the normal date. The discovery piece has seen circulation and is not now traced; two or three others have been rumored but to date no other has yet been examined. As with the 1863/62 trime (or 3 cent silver coin) the entire date was heavily punched and repunched in an attempt to efface or at least conceal traces of overdate.

Restrikes exist, made about 1870-71, of regular type Proofs of 1863 and 1864 (possibly other dates). These have a reverse die of ordinary type, first encountered on patterns dated 1870, and D of UNITED is open at top—from either wear or damage to the hub from which these obverse dies were made. This same open D is found on almost all half dime obverses 1871-73. The restrikes come in copper and aluminum and may also exist in silver; they were made only in extremely small numbers.

S mint coins of 1871 and many of 1872 come with mintmark S within wreath, exactly as with several dime reverses of 1875. All other reverses of San Francisco coins have the mint mark below wreath. Reason for the brief change is not known.

The growing use of shield nickels in the late sixties and early seventies (originally intended for redeeming paper fractional notes) made half dimes less and less necessary except in the far West and Southwest, where the bulk of survivors of many dates of this period have turned up. As a result, when the framers of the Mint Act of 1873 were considering which denominations to retain, which to abolish, they found that as the nickel 3 cent piece made the trime superfluous, so the shield nickel made the half dime superfluous. Accordingly, the Mint Act of Feb. 12, 1873 omitted the half dime from the roster of authorized United States coins, and issue ceased, ending a denomination which had been struck off and on over nearly eighty years.