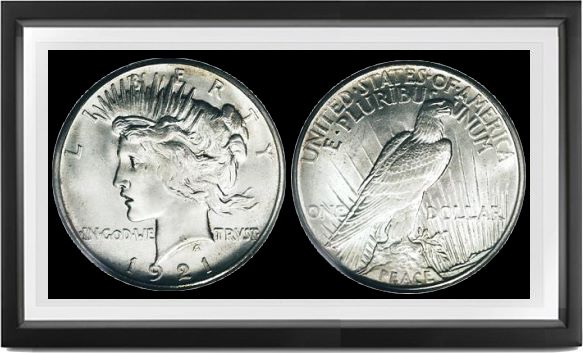 BORN AMID WARS, THE UNITED STATES has reflected the fact in its coinage since 1797, when Robert Scot's mistake—or Mint Director Boudinot's patriotism, we cannot be sure which—placed the warlike arrows in the eagle's dexter claw, the place of honor, relegating the olive branch of peace to the sinister or less honored side. In 1872, the pattern "Amazonian" silver coins omitted the olive branch on all, featuring two shields and a sword in addition to the arrows, with IN (this) GOD WE TRUST across one of the shields. And in 1916, the Weinman dime showed the lictor's fasces of rods and axe—symbolically the power of corporal or capital punishment—far more prominently than the all but unrecognizable olive branch. Only in 1921 did our nation get around to celebrating peace on a coin—supposedly to commemorate the treaty ending World War I. We owe the idea as well as the coin to Farran Zerbe, late Historian of the American Numismatic Association. Zerbe presented a paper at the 1920 ANA Convention (Chicago, August 1920) proposing such a coin—either the half dollar or, should dollar coinage be resumed, the silver dollar.

ANA created a committee under Judson Brenner to propose such a bill to Congress; the committee convinced Rep. Albert H. Vestal (Chairman, Coinage, Weights & Measures Committee) of the project's value, and a joint resolution was presented May 9, 1921 to that effect. However, when Congressman Vestal—seeking quick passage—tried to place it on the unanimous consent calendar, a single objection followed, and the ensuing debate lasted until adjournment without a vote. (It developed that the dollar could be legally issued with any design, since the Morgan type had been around since 1878—well over the statutory 25 years.)

The federal Fine Arts Commission announced a design contest, inviting the nation's eight leading sculptors to submit models. The winner, Anthony de Francisci, portrayed his wife, Teresa Caffarelli, as Ms. Liberty, with a "radiate" crown somewhat like that on certain Roman coins; the statutory eagle held a broken sword, a device which was objected to by hawkish officials on ground that it would be interpreted as defeat rather than negotiated peace! As a result, the design was changed to show the eagle, minus sword or arrows, with olive branch, atop a mountain peak inscribed PEACE. Hastily approved, it was even more hastily translated into working hubs and dies, and some 1,006,473 were struck December 26-31, 1921, in high relief, the first one being sent by messenger to President Harding January 3, 1922. At least five matte proofs were struck, with granular surfaces like those 1908-15 gold proofs; on these all relief details are beautifully sharp. One of them is in the Smithsonian Institution, another in the American Numismatic Society museum, a third went to Col. E.H.R. Green (son of Wall Street's famous Hetty Green), later to Frederick Geiss; the other two were discovered in later years, one of them realizing $9,000 in a Merkin auction in 1971. Unfortunately, the production coins were rather weak and vague in centers, for which reason Mint Engraver Morgan (whose dollar design had been superseded) lowered the relief on the electroplate model (by hammering it with a flat board!) and made numerous minor changes, while de Francisci stood by helpless. The coins of 1922-35 are all from the modified design, except for the five matte proofs of 1922; letters are frequently hard to read even on perfect mint state examples.

None of the dollars of 1922-35 can be called rare (with one exception), though the 1928 and 1934 S have turned out to be difficult to find in upper condition grades. The exception is the matte proofs of 1922, of which five are known; they match the 1921 proofs in most details. One went directly to Farran Zerbe, who later placed it into the Chase Manhattan Bank Money Museum; its curator later traded it to Lester Merkin, who put it into the 1970 Central States convention sale, where it brought S14,000 after offers in excess of $20,000 had been made and refused. A second was discovered by Donald L. Rhodes in California, 1958, later owned by Lewis Moorman and Walter Breen; a third was bought by Lester Merkin in California, and two others have since shown up—also on the west coast, both from noncollector sources; both somewhat impaired—one of which brought $9,000 in the January 1973 Florida United Numismatists convention auction.

Most of the 1922-35 dollars saw little circulation outside Nevada gambling casinos, the majority being held by banks as cash reserve, being paid out around Christmas time, returning to the banks and tax offices in January. Existing uncirculated stocks of Peace coins mostly came from Treasury holdings in the 1950's and early 60's; their price levels depend less on mintages than on quantities recovered from the Treasury. The attempt to mint Peace Dollars in 1964—again, largely for the benefit of Nevada casinos—was aborted, reportedly all 305,076 being melted, though we would not be surprised to find that a few had survived in official hands.

Click here to view our current inventory of Peace Dollars