THE SHIELD NICKELS "WITHOUT RAYS" 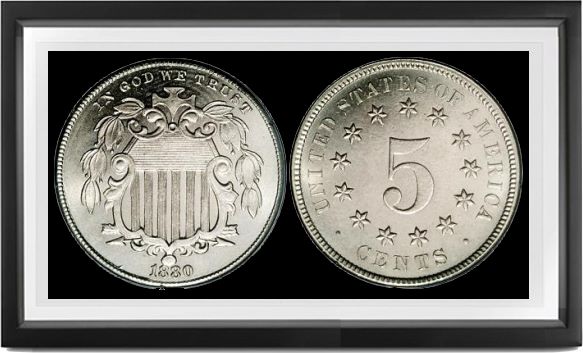 DURING THE TENURE OF THIS DESIGN, 1867-83, no major changes were made, though in 1868 and 1869 two new hubs for reverse were put into use, showing stars slightly differing in position among letters, the 1869 hub being continued through 1883.

In 1872 some Proofs and a very few business strikes are from "shift" obverse dies, showing crossing horizontal and vertical stripes in shield.

In 1873 we find closed and open 3's, the former found on all Proofs and a minority of business strikes. There is also an overdate which shows the whole date heavily double punched over 1872, in such a way as to render it impossible to tell if the 1873 was from closed or open 3 logotype. I have owned two specimens and have heard of a third.

The dates 1979-81 are usually met with only in Proof State, business strikes being issued only in limited quantities.

Over half the nickels dated 1882, business strikes and Proofs both, show carrying degrees of filling within 2; these are occasionally offered as "1882 over 1" (which cannot be confirmed under magnification on any specimen yet shown me), formerly more often as "1883/2." A rare pattern date 1882 resembles the genuine issue but lacks the ball-shaped ornament above date. Another and still rarer one is struck from regular dies but in a special collar producing five equally spaced bars on its edge " the blond man's nickel, first described by Capt. John W. Haseltine in his auction of March 1, 1883. Though not over three have been traced to date, it is probable that others exist; have you checked your Proof 1882 lately?

The final year, 1883, is marked not only by a variety of partial and totally recut dates, but by no less than five different overdates, 1883/82. One of these is found only on Proofs, and shows only part of upper curve of 2 within 3. Another, the commonest, shows part of middle of 2 within 3; more than one die may exist. The very earliest date of this die, much rarer, shows almost the entire digit as well as parts of extra 8's, the wider 1883 logotype punched over the closer 1882. Another, very rare, shows date as "18823" " the die was reground at once to efface the extra digit. Another, equally rare, shows part of 2 at right of 3. No complete set of these overdates is known.