THE SILVER KENNEDY HALF DOLLAR (1964) 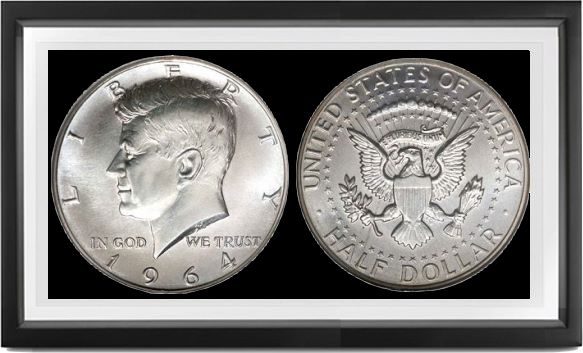 Following the precedent set by the Roosevelt dime, about three days after President Kennedy was assassinated, Ms. Eva Adams, then Director of the Mint, telephoned Gilroy Roberts, then Chief Engraver at the Philadelphia Mint, to the effect that the authorities were intending to place a Kennedy portrait onto one of our silver coins—quarter, half dollar or silver dollar as yet not decided. She spoke of the possibility of using the Presidential seal for a reverse design. On November 27 she phoned him again and indicated that a profile head was wanted, specifically the one earlier used on the Kennedy inaugural medal, with the same eagle as on the presidential seal and the inaugural medal. Roberts should make up the original dies for the half dollar, on the grounds that Jacqueline Kennedy did not wish to have her late husband's portrait replace that of Washington on the quarter, and it was very doubtful if silver dollars would be issued. And no matter if Congress had not yet passed an authorizing act; nobody seriously expected any major opposition.

The time pressure was all but unprecedented in the Mint's history. Roberts later said that the project was barely within the hounds of possibility only because the original models for the Kennedy medals were still preserved and could be used as a basis for reductions. These reductions—first to about five inch diameter, later to coin size—afforded opportunity for reducing relief to a degree practical for production coins, and for making certain other modifications.

On December 10, 1963, President Johnson issued press releases recommending passage of the bill which would authorize this coinage design. On December 13, the first trial dies were completed from Robert's obverse and Frank Gasparro's reverse, and several impressions made for delivery to Ms. Adams. On December 15, she summoned Gilroy Roberts to Washington to discuss the trial impressions with her, Treasury Secretary Dillon, and some other officials. At the conference, all concerned approved the designs, but Dillon wanted Jackie Kennedy's opinion; two days later, they met with her and Attorney General Robert Kennedy. Aside from a tentative wish for a half length or even full-length portrait of JFK (which Roberts rejected as impossible, there being no model usable for making the necessary galvanos, reductions, and dies, even if time permitted), Mrs. Kennedy approved of the designs except that she preferred to de-emphasize the part in JFK's hair. This was done on the five-inch reduction, and a new trial die was made showing the recommended changes. On December 27, Gilroy Roberts flew to West Palm Beach, Fla., to show newly struck impressions from this second trial die to Mrs. Kennedy and Secretary Dillon, who enthusiastically approved them. The next step was preparation of working hubs and production dies.

Meanwhile, back at the Capitol, Congress finally passed the authorizing act on December 30, and it was promptly signed into law.

Proof dies were delivered on January 2, 1964 and the first press runs began, eventually to comprise some 3,950,762 Proofs for the 1964 sets. As of January 30, 1964, the Denver Mint began production of regular Kennedy halves for circulation; the Philadelphia Mint followed suit sometime during the following week. On February 11 simultaneous ceremonies were held at both mints in the presence of a variety of Treasury officials, commemorating the new design; but coins were not available to the general public until March 5, when some 26,000,000 of the new coins were shipped to the Federal Reserve banks for distribution.

The coins promptly vanished, almost the entire issue being snapped up by souvenir hunters, speculators, and investors. Some stupid persons spread the rumor that Gilroy Roberts' initials GR on the truncation represented the Soviet Russian hammer and sickle, leading to denunciations, hoarding of coins pending possible withdrawal, and angry Treasury denials. Coinage continued until enough were around to offset hoarding.

Click here to view our current inventory of Kennedy Half Dollars