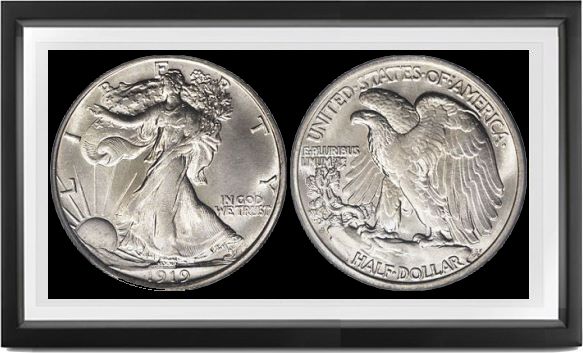 THE SAME COMPETITION WON Adolph Alexander Weinman a prize and the commission to design the new dime for 1916 also won him the same privilege for the half dollar. His design, replacing Charles E. Barber's stolid Germanic conception, embodies a remarkable conceit: Ms. Liberty is dressed in the American flag, anticipating a rebellious counterculture fad by over fifty years. Striding eastward (towards war torn Europe), she points into the sky at nothing visible; in the crook of her left arm is an oversize bundle of oak and laurel branches, said to be for military and civilian honors. On her feet are Roman cross-thonged sandals, and on her head is the same kind of close-fitting cap as on the new clime, though apparently without wings. On reverse, the gnarled tree nearest the eagle's forward talons is said (in Mint Director Robert Woolley's Annual Report, June 1916) to be "a sapling of Mountain Pine, symbolic of America"- a peculiar choice, as the tree is neither exclusively American nor in any way remarkable except perhaps for hardihood near the timber-line. These details are mentioned, as they can rarely be made out even on Uncirculated coins, so weakly are roost of them brought up.

The adopted version of the design was preceded by a large number of modified versions of Weinman's original concept. Silver specimens ("patterns") are known of five or six of these, some though not all represented in the Smithsonian Institution; none were supposed to have reached the public's hands. One is very similar to the adopted design though with a much smaller date, not extending beyond Ms. Liberty's foot in either direction; another simply lacks Weinman's monogrammed AW from lower right reverse; others are pictured in Dr. Judd's U.S. Pattern, Experimental and Trial Pieces. The version adopted is in some ways worse than any of these, in that the vast majority of production coins are so weak that Ms. Liberty's headdress and branch hand cannot be made out, and the striations representing red stripes on flag are blurry—as are most of the eagle's breast and leg feathers. Really sharp strikes are found only on the extremely rare satin finish Proofs of 1916-17 and the old style brilliant Proofs of 1936-42. Full branch hand coins of most years are virtually unknown.

Designs are completely hubbed except for mint marks, as on the new dime and quarter designs of this year. Varieties accordingly are very minor, consisting of mint mark size changes (1928 S, 1934 D, 1941 S), mint mark position changes (obverse to reverse in 1917, and very minutely thereafter), mint mark repunching (many years), die cracks and clash marks (many years), slight doubling (1941 D and several other years, from in misaligned second blows to a working die from the hub imparting the designs to it), incomplete flag and feathers and/or missing monogram AW (former on many dates, latter on 1929 S and some proofs of 1940 and 1941). These last come from excessively vigorous lapping of dies to remove clash marks.

However, the Mint authorities knew well that the design, despite its great artistic merits, had unsatisfactory striking quality. For this reason, in 1918 a new obverse design modification was adopted, in which details of garment at throat are incised; if anything, the striking quality thereafter was worse. In 1937 another modification was attempted, with only one almost vertical ray touching flag; this in turn was again changed in 1938, leaves differing in shape, and more details incised on drapery at arm below stars. This last version continued through 1947, but even the latest years seldom show even nearly full central details. It was probably this fact which ultimately induced the Treasury authorities to replace the Weinman design with the short-lived Franklin design in 1948.

There are no truly rare dates or mint marks, though in pristine Mint condition many of the dates between 1916 and 1933 are very difficult to obtain, few rolls being saved by the major hoarders of most of these (William Pukall, A.C. Gies, Wayte Raymond).